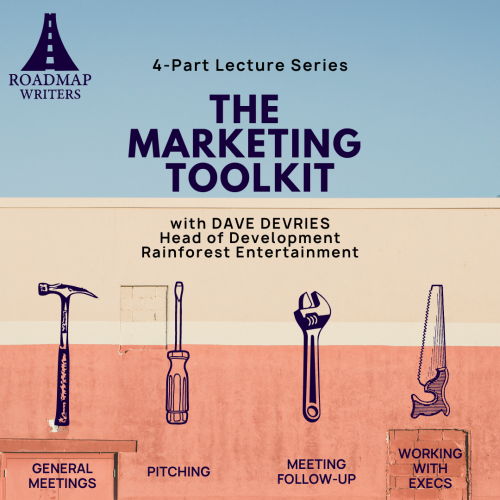 It's no secret that pitching, networking and marketing yourself and your work generally makes writers nervous. We hear you! We spend all this time with ourselves and our material and it's hard to figure out how to communicate what's in our head to reps or execs.

But pitching, networking, and marketing are skills we have to develop in order to build a successful career in this industry. The good news is that we don't have to learn those skills the hard way.

Enter Dave Devries with this special four-week lecture series designed to give us the tools we need to confidently put our work out there!

This Four-Week Lecture Series Will Cover:

This week, we will focus on general meetings: what they are, how to prepare, and how to leave a good impression.

Week Two - How to Pitch Your Project

This week, we will focus on pitching dos and don'ts.

Week Three - What Comes After The General

This week, we will cover what to expect after a general meeting: follow up etiquette, when to reach back out, etc.

This week, we will focus on development and how you can cultivate the best possible working relationship with execs.

A graduate of the University of Michigan with degrees in Film and Psychology, Dave Devries is an independent Film & TV Producer (JASON BOURNE; PLUS ONE; ADVENTURE FORCE 5; SAVING ZOE) and now runs development for Rainforest Entertainment. He has developed and produced a wide range of projects, including major studio films, award-winning indie films, TV shows, digital series, and scripted podcasts for HBO Max, ABC, Freeform, NBC, USA, Syfy, YouTube Red, Facebook Watch, Universal TV, UCP, eOne, Go90, Snapchat, Eko, and Vudu. An avid hiker and camper, Dave has spent months trekking through Alaska, Northern Ontario, and many of the National Parks across the country.