Lecture Series: The Fundamentals of TV 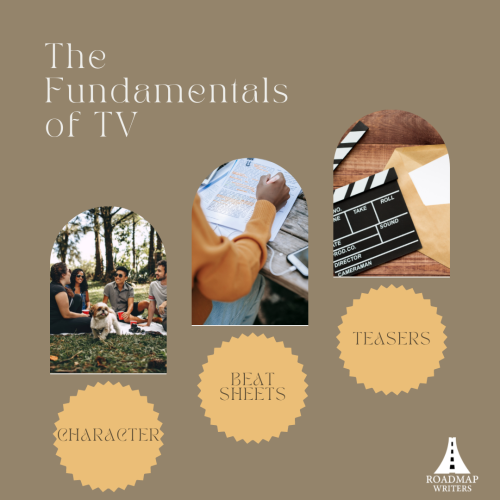 We love TV here at Roadmap, but crafting a stand out pilot is challenging. There's so much to consider: characters, story, tone, story engine, audience, marketability, etc. We know it can be overwhelming, but fret not! You can absolutely navigate these waters and write a killer pilot sample if you keep your fundamentals in mind.

But what are the fundamentals of a good TV pilot? To answer this, Roadmap favorite Glenn Geller has a special lecture series designed to help everyone put their best pilot forward!

This Three Week Class Will Cover:

Week One - Fundamentals of Character Development

This week, Glenn will discuss the fundamentals of character development:

This week, Glenn will discuss the fundamentals of beat sheets:

This week, Glenn will discuss the fundamentals of teasers:

In October 2019, Glenn Geller joined Howard Gordon and Alex Gansa's production company as President. Based at Sony TV, Geller oversees the development of projects targeted for streaming and cable for the Emmy Award-winning producers.

From June 2017 to October 2019, Geller developed series under his GellerVision banner at CBS Studios. He co-created and executive produced the documentary series PANDEMIC on Netflix. Geller is an executive producer of the upcoming FOX reboot AMERICA'S MOST WANTED: LIVE. Along with Academy Award-winning producer Dan Jinks, Geller is producing the upcoming Walt Disney live-action feature film MARLEY, written and directed by Bill Condon, with original music and lyrics by Stephen Schwartz.

From September 2015 to June 2017, Geller served as President, CBS Entertainment. In his first season in the role, Geller led CBS to the top of the network standings, finishing first in viewers (for the 13th time in 14 years), adults 18-49 and adults 25-54 and with more top 20 hits than any other network. Geller lead the Network's entertainment primetime programming teams in all genres, including drama, comedy, reality, specials and long-form, and all day-parts, including late night and daytime. Geller oversaw the development and production of key hits for CBS, including YOUNG SHELDON and BULL, Emmy-nominated late night series THE LATE SHOW with STEPHEN COLBERT and THE LATE LATE SHOW with JAMES CORDEN, alternative limited series THE CASE OF: JON BENET RAMSEY and HUNTED, and Emmy-winning daytime talk show THE TALK.

From June 2013 to September 2015, Geller served as Executive Vice President, Current Programming for the CBS Network Television Entertainment Group. He oversaw the Company's combined Network/Studio current department and for more than 30 primetime series on CBS, The CW, and cable, including: critically-acclaimed JANE THE VIRGIN and CRAZY EX-GIRLFRIEND, multiple Emmy-winning series MOM and THE GOOD WIFE, HOW I MET YOUR MOTHER, summer hit UNDER THE DOME, and television's #1 franchise NCIS.

From 1998 to 2001, Geller served three years in Drama Development at 20th Century Fox Television. Geller served on the board of directors for GALA Choruses, the Gay and Lesbian Association of Choruses, leading the North American LGBT choral movement.

Geller is a graduate of Purdue University (B.A., English) and Northwestern University (M.A., film). He resides in Los Angeles, CA with his husband Jim and their bichon/poodle rescue Paloma.