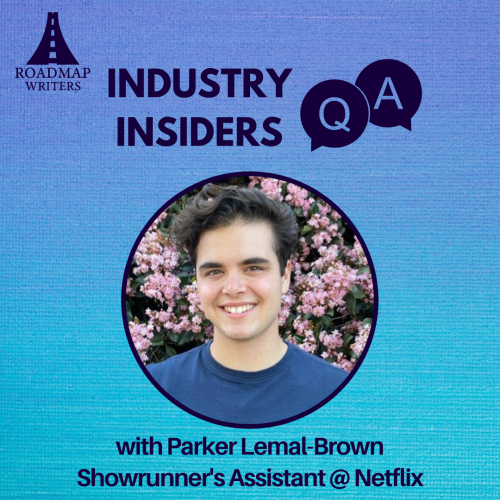 If you have a whole bunch of industry questions bouncing around in your head but no one to ask, Roadmap Writers has the program for you! During this one hour session, you will be able to ask Parker Lemal-Brown your industry questions face to face on Zoom.

This session is for writers of all levels looking to gain more knowledge about the ins and outs of the industry.

If you have fun with this one, check out our monthly Exec Q&A program starting in July 2022!

Parker Lemal-Brown (he/him) is a transmasculine writer and slam poet. Parker was raised by a literal village in rural New York and graduated with a degree in Sociology from Bowdoin College.

Parker has done creative development and research for Joey Soloway (TRANSPARENT) and Shonda Rhimes (GREY'S ANATOMY, BRIDGERTON). He worked in the writers' rooms for BLUFF CITY LAW on NBC and THE BAKER AND THE BEAUTY on ABC. He was Associate Producer for a Quibi series hosted by Marsai Martin (BLACK-ISH). Parker is also a script consultant at The Black List, Roadmap Writers and Coverfly.

Parker currently works as the Showrunner’s Assistant on Netflix's BRIDGERTON. In his spare time, Parker draws cartoons and screams showtunes in his car. He is represented by Kaplan-Perrone.