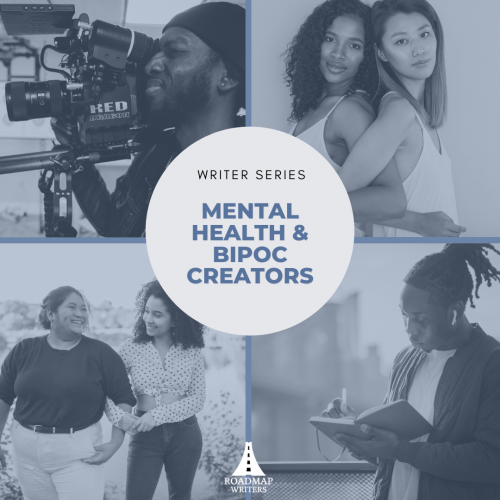 Webinars are conducted via video conferencing software ZOOM. You will receive a link to the recording of the Webinar via email within 24 hrs. following the live session.

Let’s be honest. Being a writer/filmmaker is awesome, exciting, and wonderful in so many ways, but it can also be overwhelming, stressful, anxiety-inducing, and mentally and emotionally difficult. While this is true of everyone, the challenges in BIPOC and underrepresented communities are even greater.

Roadmap is thrilled to have panelists Geno Brooks, Myles Grier and Jayce Jurado here to help talk us through all of the anxiety, uncertainty, and stress that comes with being a writer. And how you can cope with all of these things and still go after your dreams.

Roadmap Writers is a screenwriting education and training platform for writers looking for a guided path to success. Our programs are hosted by working industry executives and are designed to empower writers with actionable tools and insights to elevate your craft and cultivate relationships with industry professionals. Since 2016, we have helped more than 170 writers sign to representation and countless others get staffed, optioned, or sell their script.

He has successfully built the digital streaming network and SVOD service, Artistic Standard TV which showcases not only his original content, but supports rising, bold voices and talent, giving them a space to hone their craft. He is an integral part of the creative collective which has amassed an audience of over 80,000. Brooks sharpened his producing, directing and writing skills as fundamental support to Oscar & Emmy Nominated filmmakers such as Virgil Williams (Mudbound, Journal for Jordan), Ali LeRoi (Everybody Hates Chris, The Obituary of Tunde Johnson), Debra Martin Chase (HARRIET) and most recently Aaron Gilbert of BRON Studios (The Joker, Birth of A Nation, Fences). Brooks is an active member of the WGA and serves on the Associate Board of Colour Entertainment. Geno is grateful for the mentor-ship of HBO Executive, Kelly Edwards, Writer / Producer Charles Murray (Sons of Anarchy, Luke Cage) and others. He most recently directed 4 episodes and wrote the Season Finale for JOHNSON/Bounce TV/A Bird and a Bear Entertainment (First Look w/ CBS / repped by CAA), Cedric the Entertainer’s production company. Brooks is managed by Jennifer A. DaRe at ATN Entertainment.

Myles Grier is an American film, television and stage actor with a diverse and eclectic background spanning the arts. Hailing from Atlanta, Georgia, Myles began acting on stage at age 11. After graduating from Atlanta’s top performing arts high school, DeKalb School of the Arts, his experience continued into commercials, independent films, as well as visual arts and film production. Since relocating to Los Angeles in 2012, Myles has broadened his horizons with guest appearances on prime-time television, including Freeform's The Fosters, FOX's Lethal Weapon, NBC's Game of Silence, ABC's Agent Carter, NBC's Aquarius, and more.

Also a Creative Producer, Myles honed his creative and executive skillset while assisting Oscar nominated producer-director Lee Daniels day-to-day in 2018. Now, as the Executive Creative Director / Producer under the production house, The Artistic Standard, Grier gets to passionately create stories for film, television, and digital. His debut short film 'Remember To Breathe In The Dark' premiering early 2020 has quickly been making an impact, currently licensed by UrbanflixTV in the US and entering the film festival circuit, winning Grier a Best Male Performance Award for his vulnerable performance as Mike Cole in the short film, which he also penned, directed and produced. Most recently, Grier was a part of the producing team who broke new audio ground on the popular app 'Clubhouse' with their innovative presentation of 'The Lion King' the musical voicing Simba."

Jayce Jurado
Executive Assistant
Most recently @ Shondaland
Jayce Jurado is a seasoned creative professional who has worked for companies including CAA, STARZ (OUTLANDER; AMERICAN GODS), and Shondaland (BRIDGERTON; GREY'S ANATOMY), providing expert script coverage and working independently with award-winning filmmakers with a focus on bringing justice to stories of the displaced.
How it Works

Immediately after registering, you will receive an Order Confirmation email that serves as the receipt for your registration. In the Order Summary section of this email, you will find the "JOIN LINK" to join the Live Webinar. Webinars are conducted via video conferencing software ZOOM. You will receive a link to the recording of the Webinar via email within 24 hrs. following the live session.

Can't Attend Live? Can't make the live session but still have a question you want to be answered during the Q&A portion? Email it to alex@roadmapwriters.com and submitted questions will be provided to the moderator to address during the Q&A.