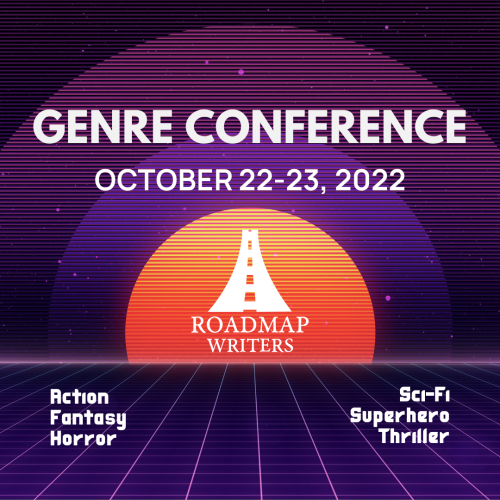 After registering, your confirmation email will contain a link to a page containing all of the information you'll need to prepare for and join your program.

All sessions take place 100% online utilizing video conferencing software ZOOM so writers can participate from anywhere in the world!

Get ready for spooky season with Roadmap and join us for our first ever ScreamWriters' Conference! This conference features panels, pitch roundtables and workshops focused on genre projects and writers. For purposes of this conference, genre means: horror, sci fi, action, thriller, fantasy and any variations of them (i.e. horror comedy, sci fi drama).

During our previous conference, a writer got signed as a direct result of the pitch roundtables - so you don't want to miss this opportunity!

A Conference Badge Includes (Sold Out!)

In virtual roundtables limited to only 6 people, each writer will have 5 minutes to practice their pitch with an exec that specializes in the genre(s) you write in . The pitch should be 2-3 minutes, leaving time for the exec to provide verbal feedback.

The host of each Roundtable will select one writer to advance to the Pitch Finale.

In these 1-hour workshops, writers will get personalized feedback on one screenwriting element, including loglines, tonal comps, bio, opening pages and written pitch. Workshops will also include specific craft and business-related topics. Each workshop will be hosted by an exec that specializes in the genre(s) you write in and will be limited to only 6 writers.

The exec of your choice will read the first 15 pages of your screenplay, then conduct a 15-min. private story notes call with you to help polish your opening pages.

Roadmap Writers is a talent training and discovery platform for screenwriters ready for a guided path to success. Our programs are hosted by working industry executives and are designed to empower writers with actionable tools and insights to elevate your craft and cultivate relationships with industry professionals. Since 2016, we have helped hundreds of writers from all over the world sign to representation, staff on series, and option and produce their projects. Our writers have been staffed on BRIDGERTON, THE FLASH, CHICAGO PD, THE FIRST LADY, NIGHT COURT, THE GOOD DOCTOR, THE RESIDENT, REACHER, SUBJECT TO CHANGE, MAYANS and POKERFACE. Writers have sold, set up and been produced by Netflix, Amazon, Hulu, MGM, American High, New Republic Pictures, Maven Screen Media, Lifetime, Will Packer Studios and Roku.

After registering, your confirmation email will contain a link to a page containing all of the information you'll need to prepare for and join your program.

All sessions take place 100% online utilizing video conferencing software ZOOM so writers can participate from anywhere in the world!

**The deadline to cancel and request a full refund is February 9th. No refunds will be given after this date.