[Perspective Series] The State of TV 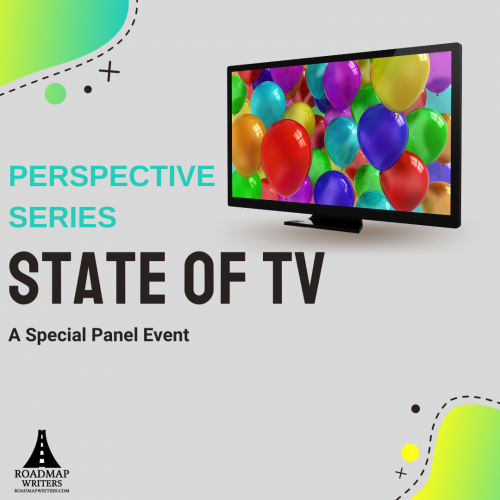 Fall is so many awesome things: cozy nights, warm cider, pumpkin patches. And while you snuggle up with a cozy blanket and a warm drink, you're probably watching your favorite TV show's newest episode. With all the new shows airing this fall, and all the shows that aired on a non-traditional schedule, you may find yourself wandering what the state of TV is these days. What's getting made? How are rooms adapting? And how can an emerging writer find success in TV?

To answer all this and more, Roadmap is thrilled to invite you to this special panel event!

Roadmap Writers is a talent training and discovery platform for screenwriters ready for a guided path to success. Our programs are hosted by working industry executives and are designed to empower writers with actionable tools and insights to elevate your craft and cultivate relationships with industry professionals. Since 2016, we have helped more than 185 writers sign to representation and countless others get staffed, optioned, or sell their script.

Mika began her storytelling career as a singer/songwriter. Mika soon realized that a career as a teen R&B singer was not what she wanted for herself. Mika then went on to become a trauma pharmacist. Mika rekindled her love for writing after starting a dating blog. When Mika discovered the world of film and television writing, she refocused her talents and moved to Los Angeles. Mika has since placed as a semi-finalist in the 2018 AFI Directing Workshop for Women and a finalist in the 2019 WeScreenplay Contest. Mika has written and directed the web series, My Girlfriend is Black, and several short films. Mika pens complex female-driven stories that explore the intricacies of strong women in unique worlds. Mika currently works as a staff writer on a network series.

Yvette Urbina is currently Vice President, Equity & Inclusion – Pipeline and Content at WarnerMedia. In her current role, she acts as the bridge between the programs and content at the core of the company’s mission to build a more inclusive and innovative industry. Her focus is identifying talent opportunities across the enterprise through cross-divisional relationships and collaboration that result in greater equity and inclusion for all content. Yvette is a proven programming leader with a producer background—the right mix of creativity and business, and a driving force behind iconic series like The O.C., That '70s Show and King of the Hill as well as the Emmy Award-winning live-action Nickelodeon comedy, Nicky, Ricky, Dicky & Dawn.

Urbina most recently served as Vice President, Nickelodeon Current Series and Development. In this role, she was a member of the executive leadership team that sustained Nickelodeon’s position as the number one rated, ad-supported, basic cable network from 2011-2019.

Quickly adapting to the changing needs of the network, she launched and led original scripted live-action series and children’s programming, with her most recent project the animated series, Santiago of the Seas, for Nick Jr.

Her early start at Nickelodeon included the management of Nick at Nite’s first forays into original scripted programming with the hit half-hour comedy Instant Mom, starring Tia Mowry-Hardrict, which also aired on TVLand, as well as See Dad Run, starring Scott Baio. She also oversaw the production of the hour-long drama Hollywood Heights, which was adapted from the telenovela Alcanzar una Estrella.

Urbina was recruited in 2009 by Oscar-nominated actor, director, and producer Salma Hayek to join her production company, Ventanarosa Productions as the Vice President of Television Development. While here, she created Latino-culture and Spanish-language comedy and drama series concepts for an exclusive relationship with ABC Studios.

Prior to her work with Ventanarosa, Urbina co-produced the independent feature Beneath the Dark, which premiered at SXSW and was purchased by IFC.

Her career trajectory included working in programming at Fox. As she advanced into the role of Director of Drama Development, she developed content with noted writers and producers and was key in moving the network from #4 to the most-watched network in the A18-49 market for 3 consecutive years.

Urbina began her work in the entertainment business in the mailroom of a Hollywood talent agency and worked her way up to become a voice-over agent.

She serves on the board of Los Angeles Team Mentoring, an organization that guides middle school students growing up in challenging urban environments, and while she recently stepped down from the board of Colour Entertainment, a group dedicated to providing dynamic opportunities to network with senior level executives as they navigate the media landscape, she remains actively involved.

Yvette is a native of Los Angeles, California and holds a Bachelor’ of Arts in Government from
Georgetown University.