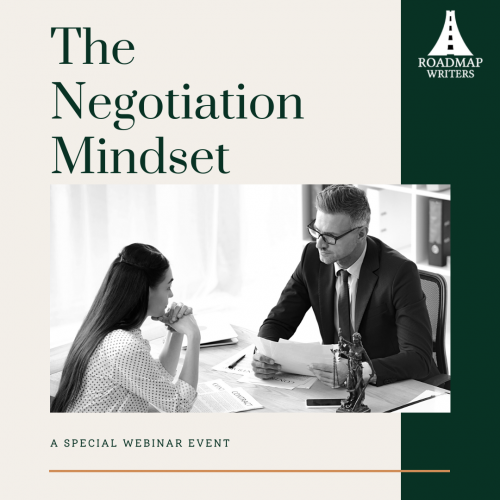 Most of us feel pretty comfortable with breaking a story and putting our scripts together. We may even have some comfort pitching and talking about our story with others. But who feels confident when it comes to negotiating with execs or producers? While you should always have an expert look over any documents before signing, a lot of us are intimidated at the very idea of negotiating with someone.

To help us prepare for this important aspect of our writing careers, Roadmap Writers is thrilled to welcome Mac Lewison to the webinar stage!

Mac Lewison is from Little Rock, Arkansas. He now enjoys living in Manhattan, Kansas with his amazing wife, Kendra, and their two boys—Lane & Owen. Mac is an adjunct instructor in K-State’s National Strategic Selling Institute where he teaches a course he developed called “Sales Negotiation” to undergraduates in the College of Business who are seeking professional
selling careers.

Mac previously served as a Special Agent with the Federal Bureau of Investigation (FBI) in the Kansas City Division. He later opened a satellite FBI office in Manhattan, Kansas. (Yes. There is an FBI office in the “Little Apple.”) Mac’s primary FBI responsibility was to investigate matters of National Security including counter-terrorism, cyber crimes and counter-intelligence (aka, “spy
cases”). He also served as a FBI Hostage Negotiator and Instructor.

Prior to the FBI, Mac was a Global Sales Account Manager for AT&T where he led teams that built multi-million dollar telecommunications networks for Fortune 500 companies. Mac also served as a contract negotiator for a startup division of AT&T.