A Month of Pride - LGBTQIA+ Stories in Hollywood 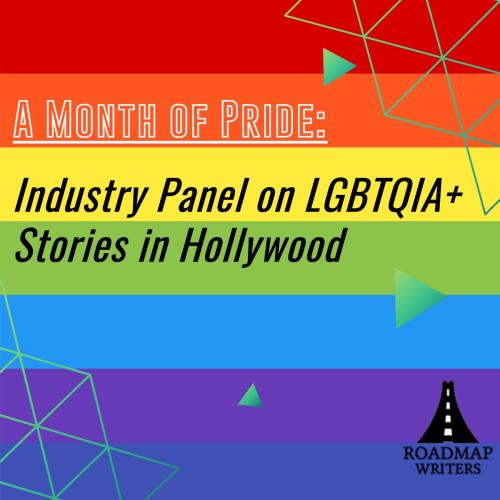 June signifies many things - the end of the school year, the official beginning of summer, rooftop parties and BBQ - but June is also Pride Month. What is Pride Month, you ask? It’s a month where, in remembrance of the Stonewall riots of 1969, various cities and organizations host Pride events to recognize the impact the LGBTQIA+ community has had on the world. And Roadmap is so excited to join with our very own Pride Event!

Tune in for this panel with an amazing line up to celebrate Pride and learn about the impact the LGBTQIA+ community has had on film and television!

A graduate from the American Film Institute with an MFA Screenwriting, producer John Hilary Shepherd recently launched his own company, Flying Rhino (Image Comics’ UNDISCOVERED COUNTRY). Previously, John ran development for Academy Award-nominated producer Brian Oliver at New Republic Pictures (1917) and Cross Creek Pictures (BLACK SWAN, HACKSAW RIDGE). He has also worked in development for Spelling Films (IN & OUT) and Polygram, as well as a story analyst for the William Morris Agency. Upcoming projects include HORRORSTOR—an adaptation of bestselling author Grady Hendrix's novel about a haunted big-box furniture store, and Guy Douall’s DUSTED—a small-town thriller with a supernatural twist in the vein of Stephen King. John is also a WGA Award-nominated writer for his work on the Showtime television series NURSE JACKIE.

A graduate of the University of Michigan, Lee Stobby has quickly made a name for himself championing strong independent voices and quality cinema. He is a literary manager, producer, and principal of Lee Stobby Entertainment. Before starting his own business in 2014, Stobby worked at Misher Films, Double Feature Films, Industry Entertainment, Innovative Artists, and Caliber Media; the lattermost is where he began representing literary clients in 2011 and produced 2 films. Stobby’s clients include Isaac Adamson whose script BUBBLES, a biopic of Michael Jackson’s chimpanzee, was named #1 on the 2015 Black List and Stobby will produce as a film with Dan Harmon (ANOMALISA) as a stop motion animation feature, Fritz Böhm (writer/director of upcoming WILDLING starring Bel Powley, Liv Tyler and Brad Dourif which Stobby also produced), Rodney Ascher (ROOM 237, THE NIGHTMARE), and Myroslav Slaboshpytskiy (THE TRIBE). His more recent produced films include SISTER AIMEE, HOW TO BE ALONE, and PEOPLING.

Michael Poisson is an LGBTQ writer and two-time Emmy Award nominee for his work on Adult Swim’s ROBOT CHICKEN. He also worked on the writing staffs of the Sony/Hulu stop-motion series CROSSING SWORDS, as well as the Macro/Netflix superhero series RAISING DION. Michael is the creator of a sci-fi comedy pilot in development at digital platform Eko. He is also the creator of the graphic novel THE ARCS published by Fanbase Press. Previously, he developed with Red Hour and Full Fathom Five on his dark comedy, UNRAVELING: A Sadistic Musical. Before writing full time, Michael was the Director of Development for Krysten Ritter’s production company Silent Machine Entertainment, based at Universal. Outside of the industry, Michael has worked as a crisis counselor at The Trevor Project – a suicide lifeline for LGBTQ youth.

Devon Byers is a literary manager with Heroes and Villains Entertainment based in Los Angeles. He and his partner, Krista Sipp, joined HVE after founding their own management company First Friday Entertainment in 2017.

Originally from Las Vegas, Nevada, Devon started his career in physical production where he produced and coordinated award-winning independent films and commercials. He soon moved to Los Angeles to attend the American Film Institute Conservatory where he graduated with an MFA in Producing. Devon continued his freelance career before making the switch to development at production company Ideate Media (Dirk Gently’s Holistic Detective Agency) and working there for nearly four years.

Currently, Devon is focused on representing clients with a unique worldview and fresh voices who have something to say in all genres. He is also interested in cultivating IP that speaks to new audiences.

Bobby Hoppey is a seasoned developer and story analyst and a founding member of Valparaiso Pictures, a development finance & production company that empowers filmmakers to take creative risks. Valparaiso Pictures is focused on growing its slate - engaging on projects across film, television and interactive content. Upcoming credits include AFTER PERFECT (to be adapted by Elizabeth Chomko and produced with Matt Reeves' 6th & Idaho), THE LINE starring Alex Wolff and John Malkovich, and NO GLORY with Kumail Nanjiani to star and Adam McKay and Will Ferrell to produce. Bobby previously spent two years as the primary feature development executive at Echo Lake Entertainment, an independent production company and financier, where he managed the film division's slate. Prior to his executive roles, Bobby served as assistant to Echo Lake's CEO and President, in addition to a tenure with the company's talent management actor division where he worked closely with clients including Dakota and Elle Fanning. Bobby holds a bachelor's degree in Journalism from Elon University.