How She Did It: A Success Story Conversation w/ Jaquie Brown 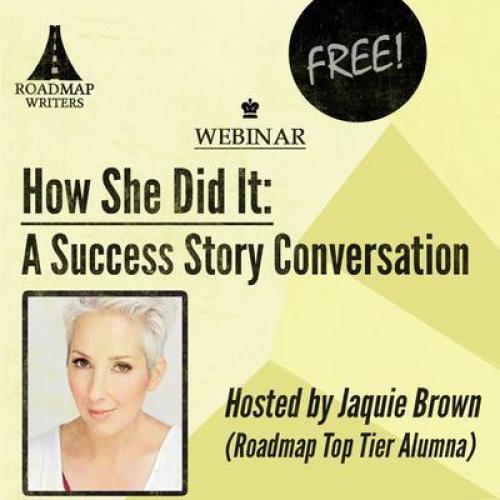 While it is true that there are as many paths to success as there are people, we can all learn something from how someone else did it. That’s why Roadmap is thrilled to have our lovely alumna Jaquie Brown back to share her story!

Jaquie Brown was born in London, England and was a self proclaimed introverted nerd. But the nerd life served her well, helping her invent stories and eventually turning that into a career. The first short film she co-wrote NOTHING SPECIAL about a son trying to escape his maniacal mother who believes he is Jesus reincarnated, was nominated for the Palme d'or at Cannes and was accepted into film festivals all around the world. She used her experience as a journalist and co-created and starred in her own comedy TV series THE JAQUIE BROWN DIARIES where she played an exaggerated version of herself as a fame obsessed journalist. The series was critically acclaimed and aired in the US, Finland and Australia. It won 'Best Comedy' at the national TV awards for both it's seasons. Jaquie won a WIFT (Women in Film and TV Award) for her performance, and she was nominated for the prestigious New Zealander of the Year Award. The Boston Globe reviewed the series saying "it's better than what passes for comedy on the networks". Jaquie is also a published author with two books under her belt. My first 'Jaquie Brown's Guide to Everything and Recipes and Quizzes' and her funny pregnancy guide 'I'm not fat, I'm pregnant!' both released through Penguin / Random House and now available worldwide on Amazon. She has multiple projects in development, including her TV pilot SHE IS EVERYTHING which won her a place with the Writers Assistants Workshop in LA (the only non-US writer to be accepted) the project was also selected as an Austin Film Festival Second rounder. The feature length version won her a place at the Stowe Fall Story Lab in Vermont and three of her TV pilots were selected for the second round for the Sundance Episodic TV lab. Now living in Auckland, New Zealand, Jaquie can be seen every Friday on top rated news and entertainment show THE PROJECT where her role is to interview local and international celebrities and chat live in the studio. She is represented by Johnson & Laird management as a TV presenter, actor and voice over artist. The Jaquie Brown Diaries is represented by DRG in London, England.