How She Did It: A Conversation w/ Tate Hanyok 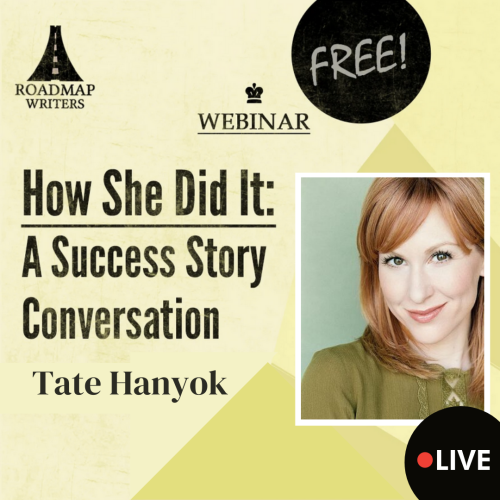 While it is true that there are as many paths to success as there are people, we can all learn something from how someone else did it. That’s why Roadmap is thrilled to have our lovely alumna Tate Hanyok back to share her story!

Tate Hanyok is a writer-actor focused on female-driven comedy and young adult stories. She was named one of the AFF & Moviemaker Top 25 Writers to Watch and named one of the Top 100 Emerging Writers on Tracking Board's 2019 Young and Hungry List. Her perspective is steeped in backyard humor, themes of awkward displacement, found family, and the endlessly unpredictable (and hilarious) reality of the underdog. Her stories are chock full of characters with fresh and unique perspectives.

Most recently, she's been hired by Picturestart to adapt the Watt Pad novel ALONG FOR THE RIDE into a motion picture, has also written PET NUP and FAMILY WEEK for Mucho Mas. Her TV Series APRIL F*#ING MAY is in development with Blue Ant Media. She’s produced the independent feature LOVE AND BASEBALL, and is currently producing her feature script SEX APPEAL alongside AMERICAN HIGH for Hulu.

Guest starring in comedies such as THE OFFICE, SUPERSTORE, COMMUNITY, SHAMELESS, TRANSPARENT, BURT WONDERSTONE, and many more, Tate has a rich actor's perspective to bring to her characters. She’s the private performance/comedy coach to many teens on numerous network TV series/studio films, and is also a seasoned improviser and alum of UCB.