How He Did It: A Success Story Conversation with Jonathan Flicker 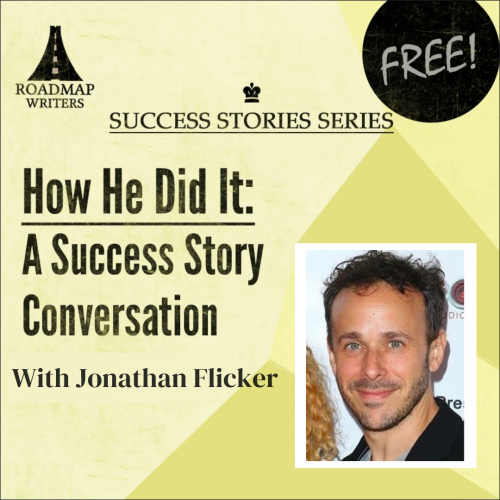 While it is true that there are as many paths to success as there are people, we can all learn something from how someone else did it. That’s why Roadmap is thrilled to have our lovely Top Tier alumn Jonathan Flicker back to share his story!

After a brief love affair with Wall Street working for a big-time broker who ended up going to prison for insider trading, Jonathan changed course and moved to Los Angeles where he produced commercials for hotels while writing at night. His screenplay ZEN CRASHING, a financial thriller, made the top thirty in the Nicholl Fellowship, was optioned by Trigger Street Productions, and quickly found financing, but after several months, the project fell apart. Jonathan then sold his thriller pilot, NAKAM, to the Weinstein Company, immediately followed by the sale of ZEN CRASHING to a Chinese financier. Since then, he’s been a top-10 finalist in numerous writing competitions including Screencraft, Big Break, and Launchpad. He went on to win the AMC Drama Teleplay Award at the 2019 Austin Film Festival for his gunrunning pilot, GHOSTRUNNER, and was selected as one of their 25 screenwriters to watch in 2020. Most recently, Jonathan was chosen as one of Coverfly’s endorsed writers and signed with Joe Riley at Zero Gravity Management.