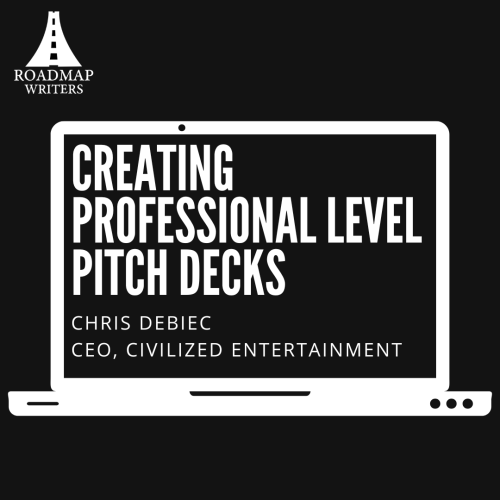 Pitching is hard enough as is, and then someone asks if you have a Pitch Deck. What exactly is it and how do you know if your project needs one? Chris Debiec is here to break down what they include and why they're so important. Chris will use real samples to walk you through different types of pitch decks, how they're structured, and what makes them unique and memorable. Plus, he’ll discuss when, where, and why you might need one.

Join us to learn everything you need to know about developing your pitch deck!

Christopher Debiec is an award-winning writer/producer/executive with an impressive thirty-three-year track record in all aspects of the entertainment industry.

Chris began his film and television career in Orlando, Florida working on a wide variety of commercials, music videos, television programs and feature films. Some of his credits include Sylvester Stallone’s OSCAR AND THE CROW for Miramax. In 1995 Chris relocated to Los Angeles to work on the film THE DEVIL'S ADVOCATE, followed by MAD CITY for Warner Brothers, THE OUT OF TOWNERS for Paramount Studios, and the ground breaking “first of its kind” live-action animation DINOSAUR for Walt Disney Studios.

From 2000-2005, Chris was called on by Academy Award-winning writer/director/producer, James Cameron to supervise production for Earthship Productions. The company produced the two-hour LIVE broadcast event entitled LAST MYSTERIES OF TITANIC, the groundbreaking documentary EXPEDITION: BISMARCK for The Discovery Channel, as well as the 3D/HD IMAX films ALIENS OF THE DEEP & GHOSTS OF THE ABYSS for Walt Disney Pictures. Earthship was nominated for six Emmys winning one for their production of EXPEDITION: BISMARCK.

In 2010, Chris was recruited as Vice President of Production at Entertainment One Television (eOne). He spearheaded the alternative programming division for cable and network distributors such as Syfy, CW, WETV, BET, MTV, A&E, Discovery Channel, Oxygen and Fox Sports just to name a few. Chris was responsible for the successful development and execution of all pre-production, production, post production and delivery of all eOne projects.

In 2017, Chris was contracted to create and Executive Produce a 2-hour documentary for NBC Sports and the United States Olympic Committee entitled - SCOUTING CAMP: THE NEXT OLYMPIC HOPEFUL. With rave reviews and multiple award nominations, soon after Chris went back with the Cameron family - this time as Chief Content Officer for a start-up Tech/ 3-D Entertainment company called Human Health Organization owned by brothers John and James Cameron.

In 2019, Chris was the Production Executive for Leyline/A24’s THE GREEN KNIGHT, a feature film which shot on location in Ireland for 5 months in 2019. Directed by David Lowery starring Dev Patel, Alicia Vikander, Joel Egerton, Sean Harris, Kate Dickie and Ralph Enison.

In 2020, the world turned upside down by the pandemic causing the Cameron family to pivot the Human Health Organization into a Covid-19 PPE and testing company. Chris, as COO, oversaw all testing and PPE protocols since May of 2020. HHO has tested over 1500 productions including A-list actors, Film and TV Studios and streaming companies.