A Conversation with Sarah Ann Masse 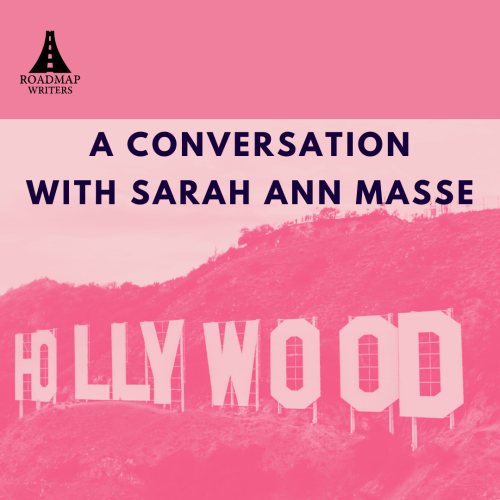 This is an important webinar. A staggering 94% of women in the entertainment industry have experienced harassment or assault, and for many of those women, coming forward isn't an option because of the very real threat of professional retaliation.

Roadmap invites Actor, Writer, Filmmaker, Silence Breaker and founder of Hire Survivors Hollywood Sarah Ann Masse for a conversation about sexual harassment in the entertainment industry as well as what we, writers and fellow humans, can do to put a stop to it.

**Please feel free to sit this webinar out if this topic may be triggering for you. If you need assistance, see the wonderful Resources Page on HireSurvivorsHollywood.com

Sarah Ann Masse is a hilarious woman on a mission; not only is she continuing the trend of breaking stereotypes and proving that females are funny, but she does so while drawing attention to the unhealthy social norms and boxes that our society places women in.

A classically trained actor, Sarah was educated and performed at The Atlantic Theater Company, The Williamstown Theater Festival, The American Shakespeare Theater, and The Upright Citizens Brigade. Her history in theater also includes directing children’s theater productions and assistant directing several of Shakespeare’s plays. In addition to starring in, and directing, dozens of viral comedy videos with her British-American married comedy duo, We Are Thomasse, she can be seen in an episode of the award winning, female driven web series “Reckless Juliets” which is available on Amazon Prime; Also streaming on Amazon Prime is Sarah’s hysterical turn in Jason Mraz’s “Have It All: The Movie” the only scripted segment of the film which she also produced and co-wrote; She has written, produced, co-directed, and stars in the award-winning short film “Tristan & Kelly” (winner: Best Short Romantic Comedy: Marina del Rey Film Festival ’19 and Best Writer: Female Filmmaker’s Fuse Film Festival ’19) co-starring ‘”Games of Thrones”’ Toby Sebastian; her British-American love triangle rom-com web series “S’N’M” which stars Downton Abbey’s Matt Barber recently premiered; She is the voice of the wildly popular audiobook series “The Chronicles of Kerrigan“; Sarah is in pre-production for the new series “Rhythm”, the drama feature “R Culture” which she also co-wrote, and has recently wrapped on the drama feature “A More Perfect Union” co-starring Quei Tann. Masse has also been cast, and is a story contributor to the new Susan Stroman directed musical “The Right Girl“. In addition to her skills as an actor, Sarah is also a writer, producer, director, professional singer, and ran a successful theatre company in NYC.

Making up half of the hit British-American comedy duo We Are Thomasse (with her British husband Nick Afka Thomas), Sarah is also the producer behind all of their viral videos (most notably series like “Feminist Fairytales” and “Awkward Exes” and stand alone sketches such as “Diagnosis: Misogyny” and “Christmas Crime”) and their live sketch show at Second City Hollywood. She has produced, written, directed and acted with many well-known artists such as Grammy winner Jason Mraz, Tony nominee and “Hustlers” star Steven Boyer, and her fellow #MeToo movement Silence Breakers including a short film focusing on the bravery of Dr. Christine Blasey Ford which was covered nationally by ABC News. Sarah has recently completed writing four feature films:“R Culture”, a drama focusing on sexual violence and rape culture, drawing on her own experiences as a Weinstein survivor and activist.; a female driven road-trip comedy, the feature version of her film “Tristan & Kelly”; and a Christmas rom-com. She is also pitching several sitcoms and TV series, is a writer in a supernatural dramedy zoom room, and performing in a new Broadway bound musical penned by fellow Weinstein survivor Louisette Geiss, featuring the songs of Diane Warren, and directed by Susan Stroman.

Sarah is an outspoken voice against the patriarchy and rape culture, a tireless supporter of survivors of sexual assault and harassment, and is one of the many women to come forward about her abuse at the hands of Harvey Weinstein. Her mission is to educate the public regarding consent, coercion, and the nature of trauma while encouraging other artists, and her industry as a whole to use their ability as storytellers to change the culture we live in to be more inclusive, representative, respectful, and dynamic for people of all ages, genders, races, nationalities, abilities, sexualities, and creeds. A recent Forbes profile details Sarah’s work as an artist using positive comedy to advocate for fellow survivors of sexual violence and also focuses on the realities of being an artist with several invisible disabilities and chronic illness. And, as evidenced in her guest blog on The WRAP and this piece in The Hollywood Reporter, Sarah has created Hire Survivors Hollywood in an effort to draw attention to the career retaliation that many Silence Breakers face.

In addition to becoming a regular contributor to Court TV’s Weinstein Trial coverage she has also contributed to publications such as The Independent. Sarah works with many organizations such as Equal Rights Advocates (as a Hollywood Ambassador she helped pass AB9 into law in CA in 2019), ECHO Training, Time’s Up (member of the Time’s Up Entertainment Safety Working group), The Wrap Women, SAG-AFTRA (member of the LA Government Affairs and Public Policy Committee, LA NextGen Committee, and alternate for the National Performers with Disabilities Committee), Senator Brad Hoylman and Safe Horizon (to pass The Adult Survivors Act) and Senator Alessandra Biaggi (to pass the Child Victim’s Act Fund), and fellow survivors and silence breakers to achieve safety, parity, and equity in her industry and beyond. Sarah frequently mentors and speaks at women’s and survivor’s organizations and film focused events all over the United States (most recently as a 30 Days of Courage Key Note speaker alongside Leah Remini and Johnathon Schaech) in order to help elevate the voices of women and other marginalized people in the industry.