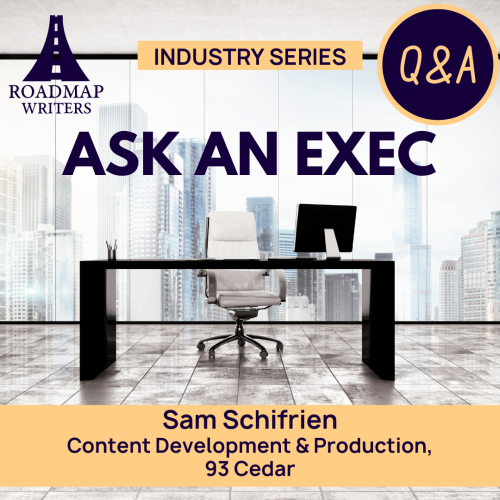 We're back with part two! If you have a whole bunch of industry questions bouncing around in your head but no one to ask, this is the webinar for you!

Join Sam Schifrien for this special webinar to ask her all your questions about representation, building a career, getting material produced and how to network with execs.

Ask an Exec is set up as both a discussion of current industry topics and an interactive Q&A, so come with questions!

Sam is a North Jersey native who moved west to attend USC, graduating with a degree in business & cinematic arts, and a job at Brillstein, where she spent the first several years of her career working with writer, directors & actors, before moving in TV development & production. She worked for the Executive Producers on ABC's RESURRECTION, spending time with the writers in LA & on set in Atlanta. After that it was a year and a half working with the companies of NBCUniversal International across the UK, Australia, and Canada. After that, she ended up working with various production companies before landing at roseyTV which led to the TV arm of Untitled Entertainment.

Now working independently as the Founder of 93 Cedar, and excited to exercise professional autonomy, Sam is looking to bridge entertainment, storytelling and advocacy.