And The Winner Is...Summit: A Conversation w/ Howard Rosenman 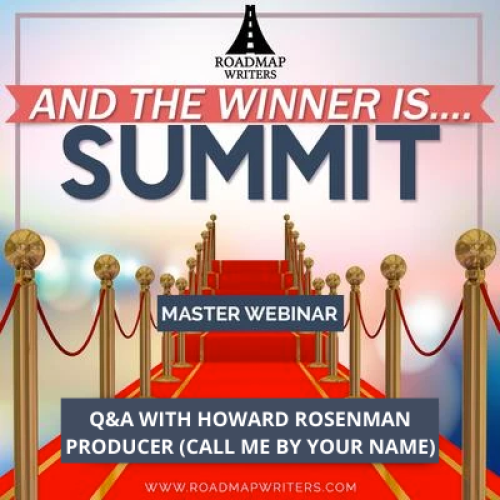 Taking the stage for And The Winner Is...Summit is executive Howard Rosenman, the producer who brought us the Oscar-winning film CALL ME BY YOUR NAME.

Howard is excited to share his insights to equip up-and-coming screenwriters to create their own masterpiece that can shake up award season.

Howard Rosenman is one of the most prolific producers in film and television, more recently producing the award winning CALL ME BY YOUR NAME, and is best known for having produced the hilarious remake of FATHER OF THE BRIDE with Steve Martin, THE MAIN EVENT starring Barbra Streisand, Sidney Lumet’s A STRANGER AMONG US starring Melanie Griffith, SHINING THROUGH starring Ms. Griffith, Michael Douglas and Liam Neeson, RESURRECTION, STRAIGHT TALK, BUFFY THE VAMPIRE SLAYER, and FAMILY MAN starring Nicolas Cage. Rosenman’s films have won 2 Peabody Awards, an Academy Award and top honors at the Sundance, Berlin and Cannes Film Festivals. In TV, Rosenman was the Executive Producer of HBO’s JOHN FROM CINCINNATI and the Oscar-nominated documentary THE CELLULOID CLOSET. He also won several Emmys for Harvey Feirstein’s TIDY ENDINGS at HBO. Mr. Rosenman garnered two prestigious George Foster Peabody Awards for Excellence in Electronic Journalism for both COMMON THREADS and CELLULOID CLOSET.