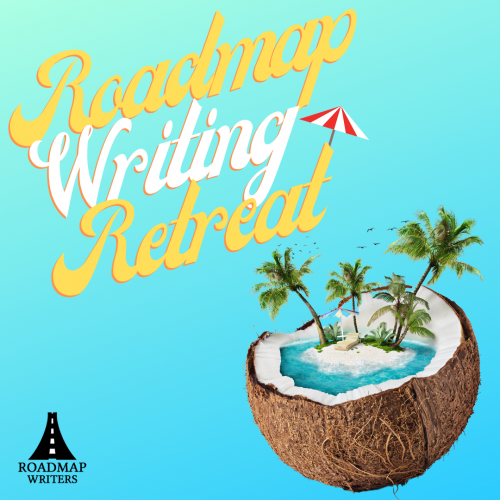 All options include 8 days / 7 nights: 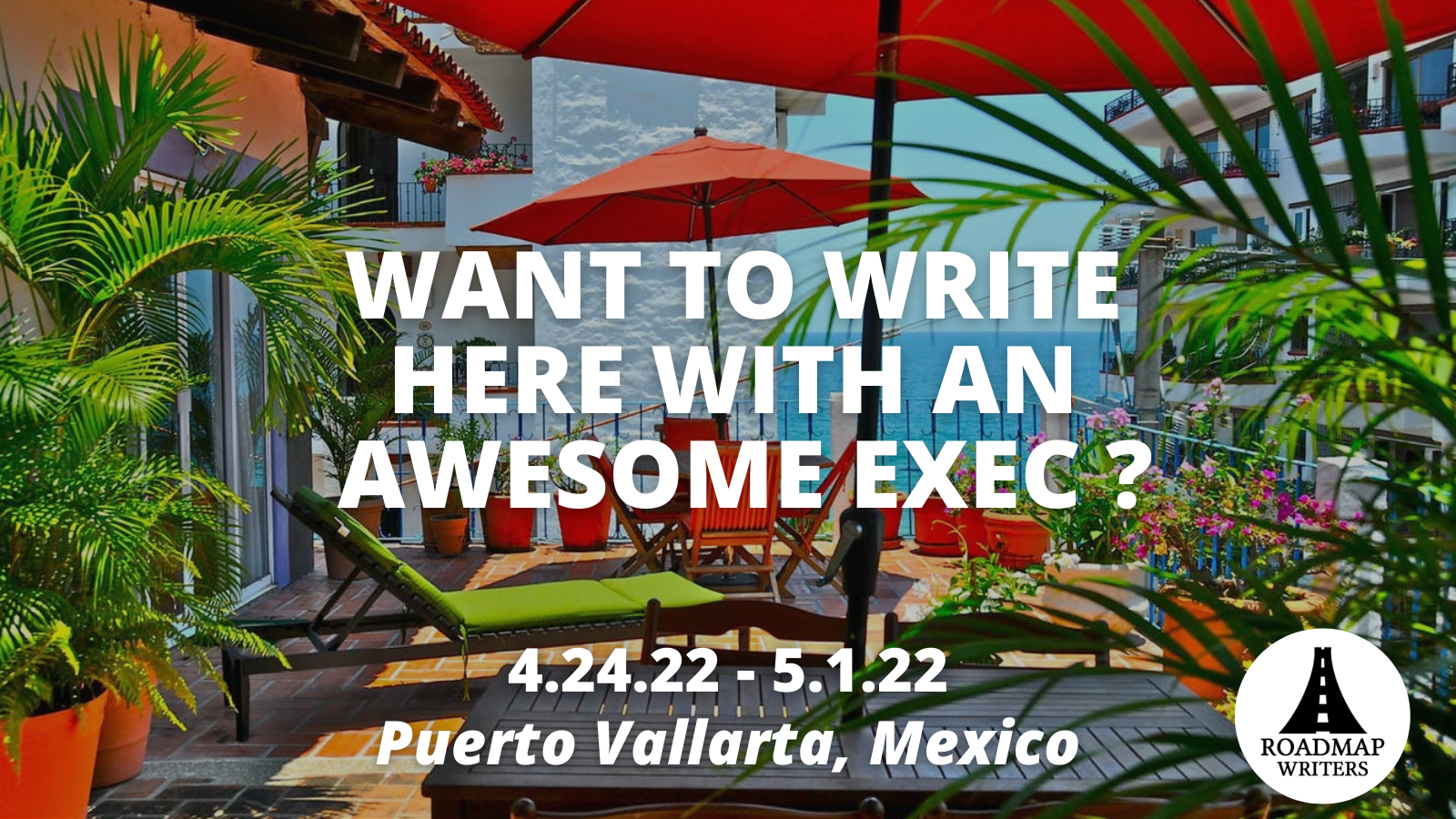 Do you dream of focused writing time surrounded by other dedicated writers, tropical waters, and industry pros? Roadmap is going on the road to beautiful Puerto Vallarta, Mexico—be one of the few to join us on our first screenwriter retreat!

and mindset coaching for creatives with Tracee Beebe 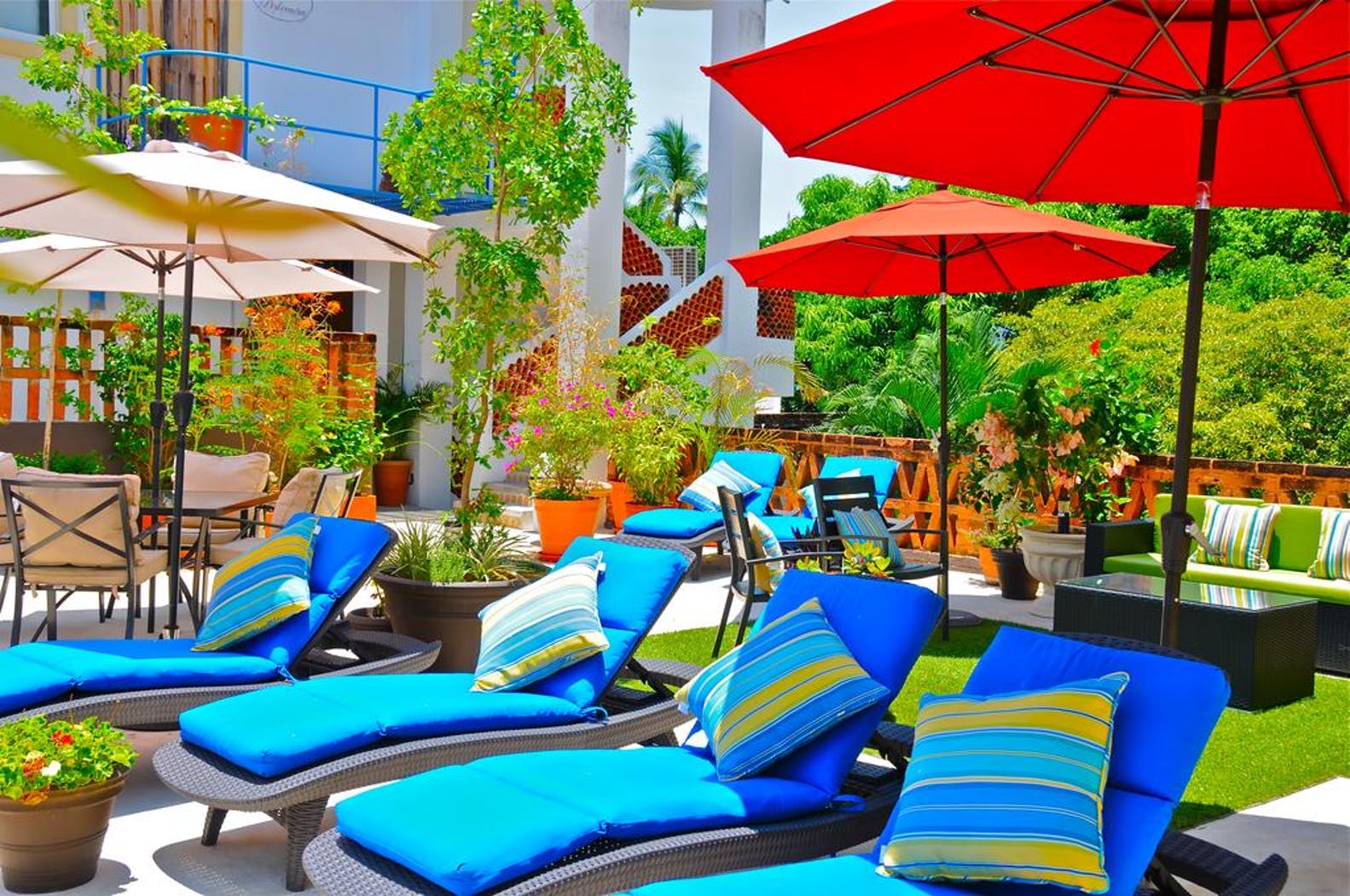 Screenwriters who are ready to put in some serious writing time while also enjoying one of the world’s most popular destinations.

After getting settled in your well-appointed private room, join our industry exec, the Roadmap team, and your fellow writers at the welcome cocktail party—then get ready to dive into a potentially career-changing week!

Each day will consist of delicious meals, quiet writing time, valuable breakout sessions with our team, table reads, and networking/bonding time with your fellow retreaters. After a morning of stretching your writing muscles, refresh with a dip in our private pool or the tropical waters at the nearby beach.

There will also be several opportunities to recharge and get inspired by participating in one or more of several available excursions such as Ziplining in the jungle, horseback riding to a waterfall for a picnic lunch, or snorkeling the azure waters. 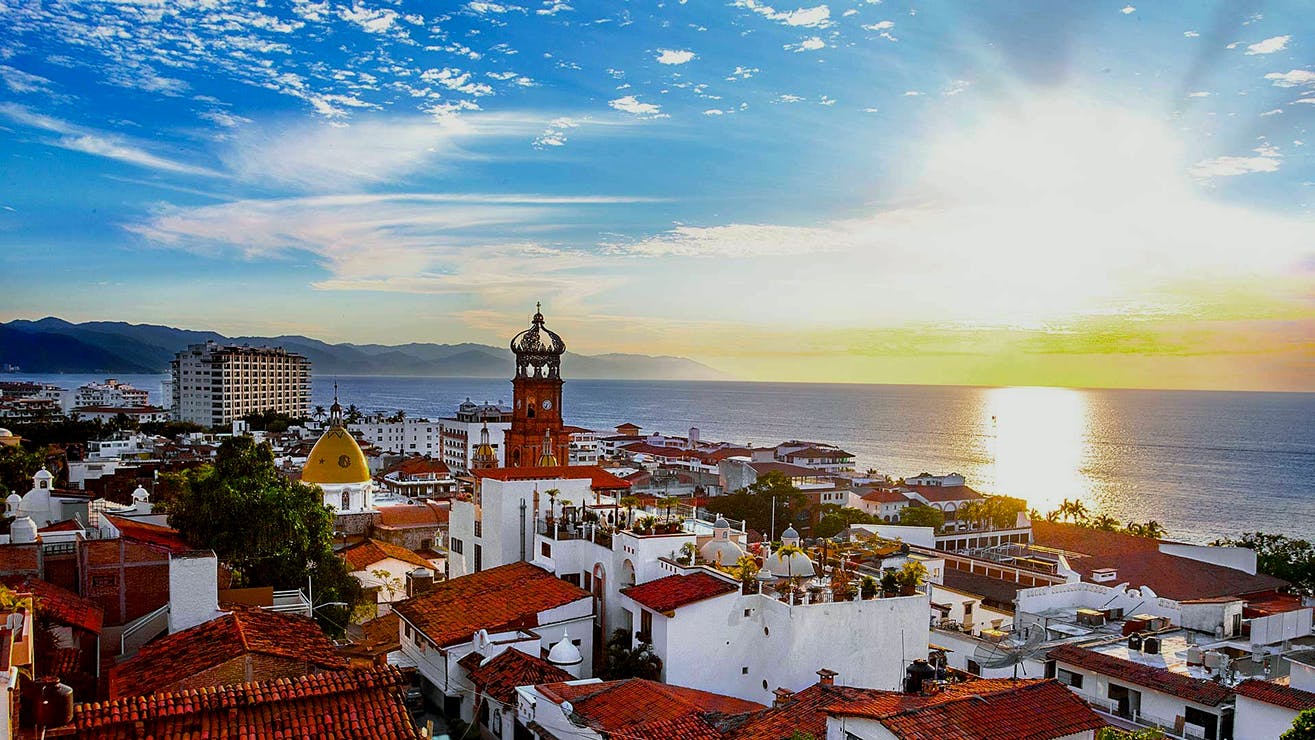 *If you opt for the 50% deposit option, the balance will be due by 12/31/2021. If you need a special payment plan, contact dorian@roadmapwriters.com. 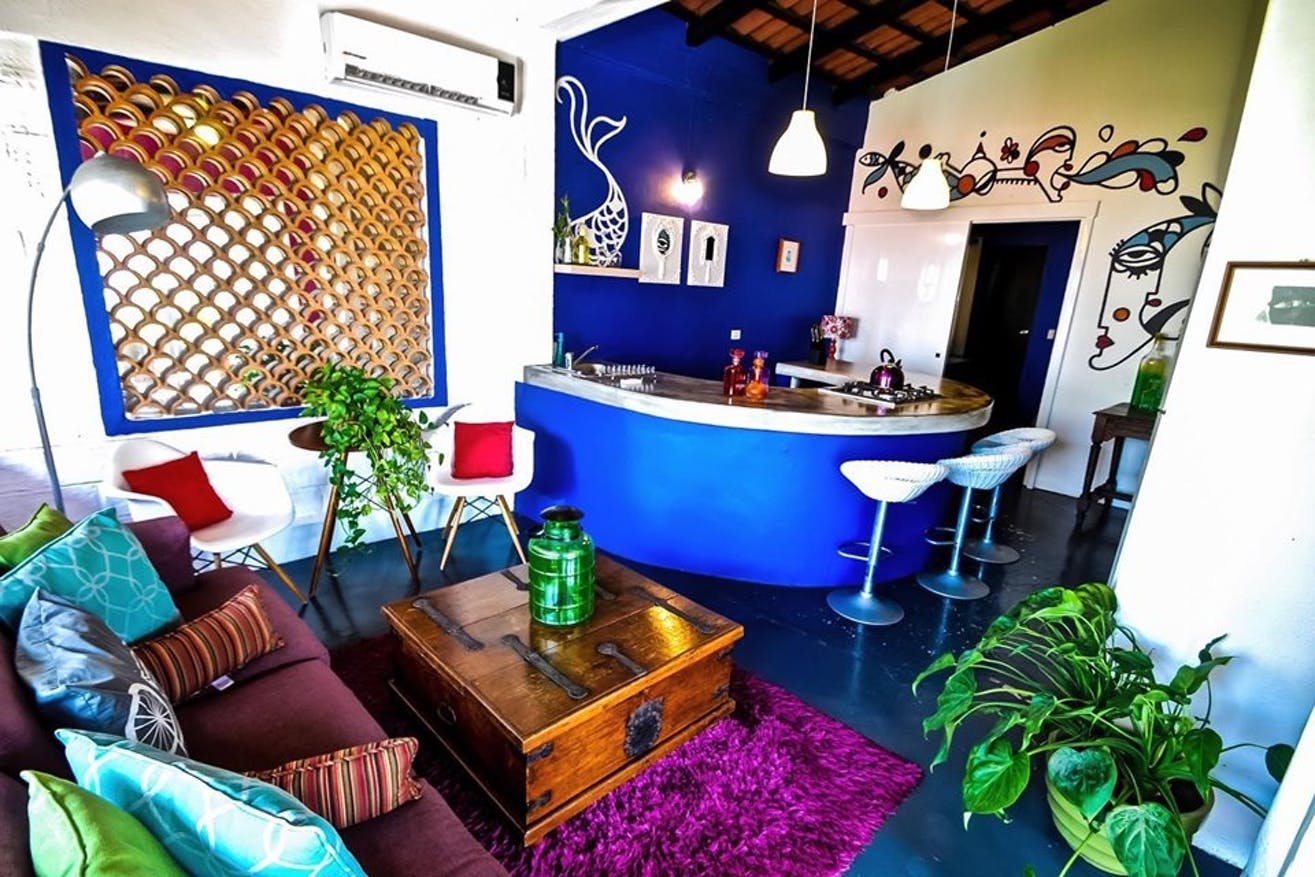 Masks: All participants must wear a face mask during ALL portions of travel from when you leave your house to when you arrive at the retreat villa. While we do not expect to require face masks at the villa as the entire villa will belong to our group for the duration of the retreat, face masks will be required in indoor settings outside of the villa. All dining must be outdoors. 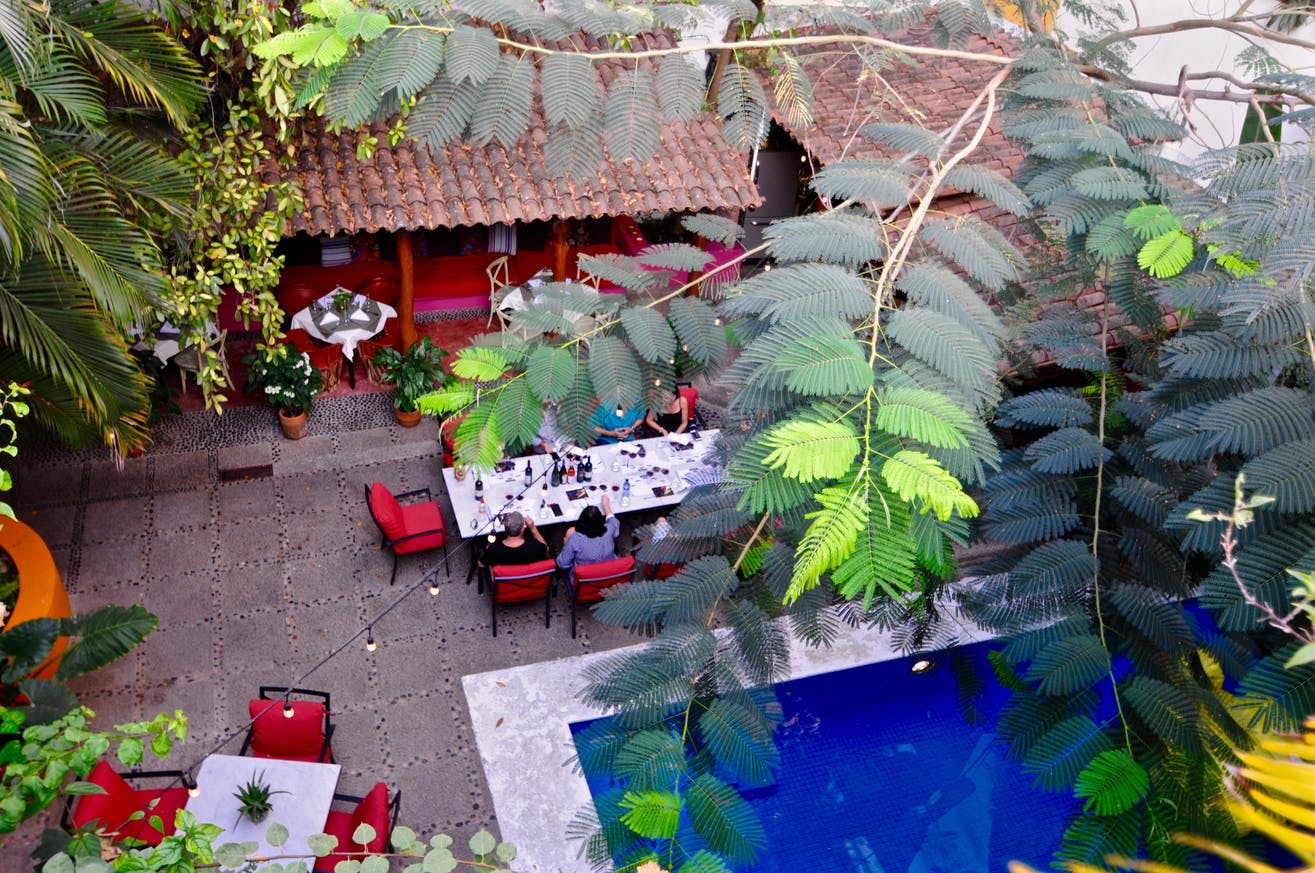 3:00 pm—Arrival. Freshen up and settle into your private room in our luxurious private villa.

6:00 pm—Welcome Happy Hour. Join your fellow writers, our special industry guest, and the Roadcrew for a Welcome Reception Happy Hour.

Dinner will be available in the attached restaurant or you can take a quick stroll into town to sample the local cuisine at any one of the many nearby local eateries!

Each day will consist of a combination of structured experiences and free time but how you spend your retreat is ultimately up to you!

8:00 am—Breakfast. Start your day with your fellow writers as we enjoy a delicious breakfast together provided by our private chef.

9:30 am—Table Read. Each writer will have the opportunity to hear a few pages read out loud and receive feedback from the group.

11:00 am—Free Time. Take an hour to yourself, sipping coffee on the patio overlooking the beautiful Pacific Ocean, writing in your room, or any way you please.

12:00 pm—Lunch. Join your fellow writers for a catered lunch provided by our private chef.

1:00 pm - 3:00 pm—Breakout Sessions. Each writer will rotate through our various daily breakout “rooms” throughout the week including personalized time with:

After that, the day is yours to write on the beach, the historic city, or shop in the nearby market. Dinner will be available in the attached restaurant or you can take a quick stroll into town to sample the local cuisine at any one of the many nearby local eateries!

Writers will also have the option to join us on 3 excursions for an additional fee:

Robins was a partner at Broken Road for fourteen years and with the company for sixteen. Robins helped steer Broken Road’s slate including films such as PAUL BLART: MALL COP and PAUL BLART: MALL COP 2, KNIGHT AND DAY, ZOOKEEPER, HERE COMES THE BOOM, SORCERER’S APPRENTICE, JACK AND JILL, INTO THE STORM, THE SCOUTS GUIDE TO THE ZOMBIE APOCALYPSE, TRUE MEMOIRS OF AN INTERNATIONAL ASSASSIN, NAKED, THE POSSESSION OF HANNAN GRACE, TAG, ISN’T IT ROMANTIC, HAUNT, PLAYING WITH FIRE, ALL MY LIFE, MORTAL KOMBAT, and VACATION FRIENDS. On the television side, Broken Road produced MTV’s cooking show SNACKOFF and as well as Netflix’s BERT KREISCHER’S THE CABIN and THE CREW with Kevin James.

Starting at George Clooney’s Maysville Pictures, and then running Robert Lawrence Productions for seven years, Robins has used his writing degrees both as a Producer and as a writer, having optioned many of his scripts in the past.

Robins is a graduate of Northwestern University and participated in the Peace Corps Partnership for Service Learning in Kingston, Jamaica. There he worked for the Jamaican Human Rights Council while taking classes at the University of Technology.

Robins grew up in the food and beverage business and parlayed his love of food into a fourteen-year, four thousand plus restaurant journey that saw him become the first and only person to eat at every restaurant listed in a Zagat Guide. Featured on CNN, KCRW’s Good Food, NBC, Delish, The Daily Meal, Robins created the concept for the restaurant ChocoChicken with partner Adam Fleischman of Umami Burger and 800 Degrees fame.

Tracee Beebe is a working screenwriter and transformational coach who is passionate about inspiring writers toward their highest success. Her focus as a writer is character driven genre fare or, as she calls it, “horror with heart.”

You may cancel and request a full refund through 01/01/2022. Cancellations requested after this period will be contingent on finding a replacement to take your spot. Roadmap reserves the right to cancel this retreat and refund your registration fee up to 30 days prior to the start of the retreat.

You are responsible for booking your own flight in a timely manner. Inability to find an appropriate flight due to procrastination will not be grounds for a refund. However, you should strongly consider buying trip insurance in the unlikely case the pandemic forces us to cancel the retreat.