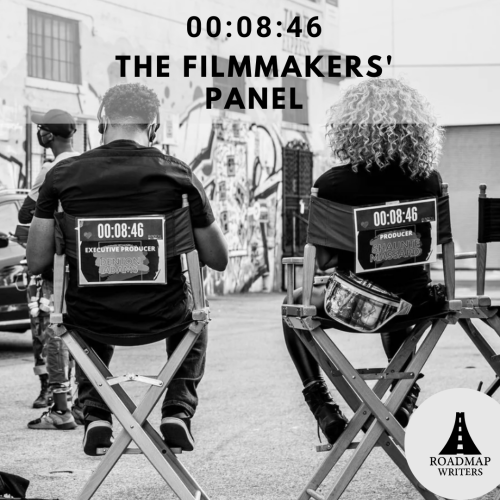 Two years ago, footage of George Floyd's murder stopped us in our tracks. Some of us took to the streets to protest, some of us donated funds, and some of us turned to storytelling. One such storyteller is Denton Adams.

Creating what was initially entitled "The Talk," Denton established several stories to make up one feature-length film. Each short film highlights themes of social inequality, police brutality, racism, and their effects on society, especially black men and women. Instead of directing it himself, he decided to bring on seven other creatives to help tell this compelling story for this independent project. It was only fitting to change the title to the length of time the world knew of George Floyd’s neck was pinned down by a law enforcement officer's knee.

Join Roadmap Writers, Denton, and other filmmakers for a discussion on the creation of 00:08:46. The film is set to premiere later this summer in Los Angeles.

This 90 Minute Panel Will Cover:

Denton is a multi-hyphenated artist and burgeoning filmmaker whose love for storytelling began at four. Inspired by the medium of film, he's aimed his focus on making motion pictures and television series. Adams received a BFA in Directing from UNC School of the Arts and an MFA in Creative Writing for the Entertainment Industry from Full Sail University. He is the founder of Heartfelt Pictures, a production company whose mission is to tell impactful stories from the heart for the heart. When he's not writing a screenplay or producing and directing, he enjoys spending time with his wife and two sons.

B.J. Minor (they/them) is a William & Mary graduate with a B.A. in Government. B.J. is a proud, non-binary artist and filmmaker that is originally from Virginia and now lives in Los Angeles, CA. B.J. acts, writes, directs, and sings. B.J. has numerous film and television credits that include Master P’s “I Got the Hookup 2” and Urbanflix T.V.’s “Casting The Net” which B.J. holds a recurring role in, acting next to the likes of Apryl Jones (Love & Hip Hop), Ella Joyce (Set It Off) and Willard Pugh (The Color Purple). B.J. is excited for their involvement in “00:08:46” because it shows that not just do Black lives matter, but ALL Black lives matter.

Morgan Danielle Day is an actress, spoken word artist, published author, dancer and director from Baltimore, MD. She attended the prestigious Baltimore School for the Arts, received her BFA in Theatre from Marymount Manhattan College and a MFA in Acting from CalArts. Thrilled to make her directorial debut in 8:46, she can currently be seen acting in The Council on Amazon Prime and in Echo Theatreʻs Underneath the Freeways of Los Angeles.

Stefan LaToure is a multi-award winning Editor (picture and sound) who was born in Houston, Texas, but spent most of his childhood in Southeast, Washington, D.C.

He briefly attended Howard University before enlisting in the Air Force, where he discovered his passion for Film and the Arts. Over the last 15 years, he has worked on over 60 film and television projects from around the world.

Stefan relocated to Los Angeles in 2017, after working for Viacom/B.E.T. in D.C., for 3 years. He’s worked in Post Production on a variety of Independent Film and T.V. projects, including as Editor on the multi award-winning Indie Film, “Water In A Broken Glass”, Post Production Supervisor at Sony Pictures, and most recently as Post Production Coordinator on the 2020 Emmy Award-Winning Season 4 of Insecure, at HBO. He’s currently Post Production Lead at MasterClass. Fun Facts: In 2019, Stefan graduated as the Salutatorian from Full Sail University with his M.F.A. in Creative Writing.

He enjoys writing, photography, and cooking on his grill.

Freddy is an actor, writer, and director best known for his role as Quinton on NBC's "This Is Us", as Nick in the "South Central Love" movie, and making his directorial debut for the anthology film "00:08:46". He is a proud native of Baltimore, MD and received his MFA in Acting from The California Institute of the Arts.

Freddy is currently producing an eight episode mini-series and podcast titled: For Love,  that is based on the true story of his 3x great grandparents, and their journey north from the newly free antebellum south.

"Take the chance! Don't fear the risk! If nothing else, you will fail FORWARD!" ~ Freddy Ramsey Jr.

Aadip Desai is  also a Roadmap Success Story (#98), signing with an agent and manager through Roadmap!

Aadip was a staff writer on The Goldbergs and has written freelance episodes for Mira Royal Detective, Sharkdog, Dew Drop Diaries, and more. He was in AFI’s MFA Screenwriting program but dropped out to join the ABC/Disney TV Writing Program. He's been honored as part of the first US cohort for BAFTA Breakthrough.

When not writing, Aadip runs the LA TV Writers Facebook Group, is an Advisor/Instructor at the Sundance Institute, a speaker at top film schools, a mentor/judge for fellowships and competitions, and interviews industry pros and moderates panels. He got good practice as a Co-Host/Producer of the On the Page screenwriting podcast, and former President of the Northwest Screenwriters Guild in Seattle. He has a functionless BA in Economics and a Minor in Music from the University of Puget Sound. Kaplan Stahler Agency and Rain Management represent him. You can follow him on Twitter and Instagram or visit his website for free screenwriting resources.