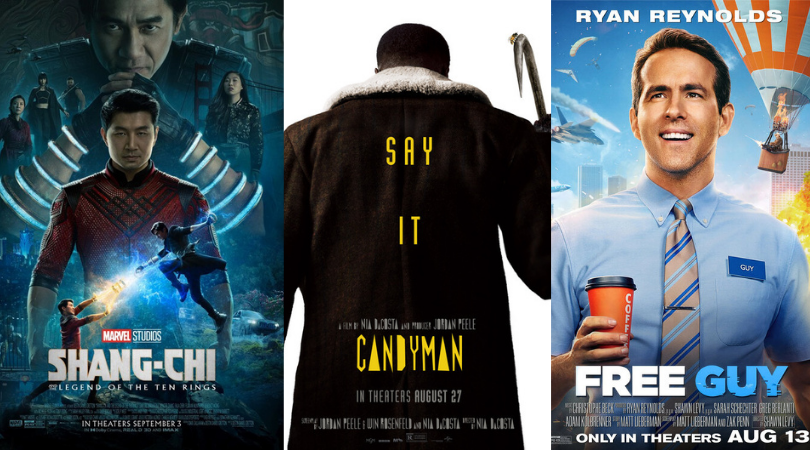 SHANG-CHI AND THE LEGEND OF THE TEN RINGS opened at #1 with a massive $83.5M (Million) domestic and nearly $140M global debut. This is per Disney, though expectations are that the final total through Monday might end up closer to $90M in the United States. Either way the Marvel release has smashed all Labor Day records, and posted a debut higher than several superhero origin films from the brand. WIth an “A” CinemaScore and no direct competition, this film will play throughout all of September and enjoy a strong multiple. Produced for $150M plus marketing, this will have no problem reaching profitability.

CANDYMAN is #2 with $13.4M, a domestic total of $41.9M, and $52.8M worldwide. Produced for $25M plus marketing, this is quickly headed towards becoming nicely profitable for Universal, continuing horror's strength in the theatrical marketplace with audiences, and in particular Universal's winning streak with the genre this year.

FREE GUY is #3 with $11.1M, a domestic total of $94.3M, and $241.7M worldwide. In China alone it has made more than $50M on its way towards $90-100M in the market. In the U.S. the film will pass the $100M mark either by the end of next weekend of middle of the following week. Produced for around $110M plus marketing, the film will be profitable during its theatrical run, in a big win for exhibitors and original content.

PAW PATROL: THE MOVIE is #4 with $5.2M, a domestic total of $31.5M, and $81.8M worldwide. Produced for $26M plus marketing, the film has already become profitable for Paramount, with more to be earned.

JUNGLE CRUISE is #5 with $5.2M, a domestic theatrical total of $106.8M, $193.7M worldwide, and over $300M total including Disney+ Premier Access revenue. Produced for $200M plus marketing, the film has hit the break-even range for the studio, and all told will be moderately profitable once all revenue streams are factored in. A sequel has already been announced, with the entire cast and crew returning.

DON'T BREATHE 2 is #6 with $2.7M, a domestic total of $28.5M, and $41.3M worldwide. Produced for only $15M plus marketing, the film has essentially become profitable for Sony and Screen Gems theatrically, with more to be earned through PVOD (Premium Video On Demand) and rentals/sales.

RESPECT is #7 with $1.6M, and a total of just $22M. Produced for around $50M, this film will be a moderate financial loss for all involved.

BLACK WIDOW is #8 with $903K, a domestic theatrical total of $182.6M, $372M worldwide, and a total earnings of more than $500M including Disney+ Premier Access, where the film has brought in more than $130M alone. Produced for $200M plus marketing, it has become solidly profitable for Disney and Marvel, albeit on the lower end of their successes. This is also without China, a major MCU hub where the film is not expected to play, though SHANG-CHI is now anticipated to secure a release date in the market.

THE NIGHT HOUSE is #9 with $700K and a total of only $6.4M for Searchlight, representing a modest financial loss.

OLD climbed back to #10 with $590K, a domestic total of $47.3M, and $85M worldwide, all on a budget of only $18M plus marketing. This one was a nice solid hit for Universal and M. Night as it wraps up its theatrical run.

Next weekend will once again be ruled by the Ten Rings as Marvel's newest superhero will continue to dominate the charts. New releases opening on September 10th will be the latest horror entry from James Wan and WB with MALIGNANT, and specialty title THE CARD COUNTER. Overall new titles will be quiet until NO TIME TO DIE kicks off a busy and lucrative fall and winter when it launches on October 8th.