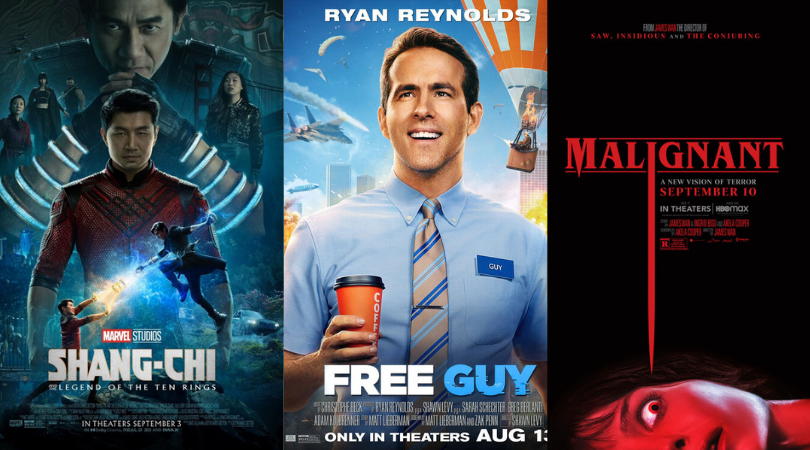 September 12, 2021
SHANG-CHI AND THE LEGEND OF THE TEN RINGS remained at #1 for the second week in a row, dropping only -53% with a terrific hold, to bring in another $35.8M (Million) domestic. The U.S. total now stands at $154.6M, and $257.6M worldwide, with much more to be earned. This is also without China, where the film, like BLACK WIDOW before it, is not expected to play. Carrying a budget of $150M plus marketing, this is well on its way to profitability for Disney and Marvel.

FREE GUY held at #2 with another $5.8M, to bring the domestic total to an impressive $101.8M and global closing in on $300M in the coming weeks, counting over $75M of that from China alone. Produced for around $110M plus marketing, this is quickly becoming a nicely profitable, original hit for Disney and 20th Century Studios.
MALIGNANT opened at #3 with a disastrous $5.5M domestic debut, and $15.1M worldwide. Produced for $40M plus marketing, this is another failure for WB, which counts nine films thus far this year which have posted losses, some more significant than others. It's an unprecedented losing streak for any studio, and could be worse before year's end.

CANDYMAN is #4 with $4.8M, a domestic total of $48M, and a worldwide total of close to $60M and climbing. Produced for $25M plus marketing, this Universal release will be modestly profitable for the studio, in a nice win which continues Universal's overall success this year despite pandemic challenges.

JUNGLE CRUISE is #5 with $2.4M, a domestic theatrical total of almost $110M, $196M worldwide theatrically, and over $300M in total revenue counting Disney+ Premier Access. Produced for $200M plus marketing, the film is essentially break-even for the studio, with a sequel already announced.

THE CARD COUNTER opened at #8 with $1.1M playing in just 580 theaters, a decent result for the speciality title and limited release.

Next weekend will be ruled Marvel and SHANG-CHI for the third time, with only WB'S CRY MACHO from Clint Eastwood, and Searchlight's THE EYES OF TAMMY FAYE as the new studio releases, neither anticipated to do much business. Overall business will be slow until Marvel and Sony's VENOM opens October 1st (previews starting September 30th), kicking off what will be an incredibly busy and lucrative fourth quarter at the box office.
The Roadmap Promise