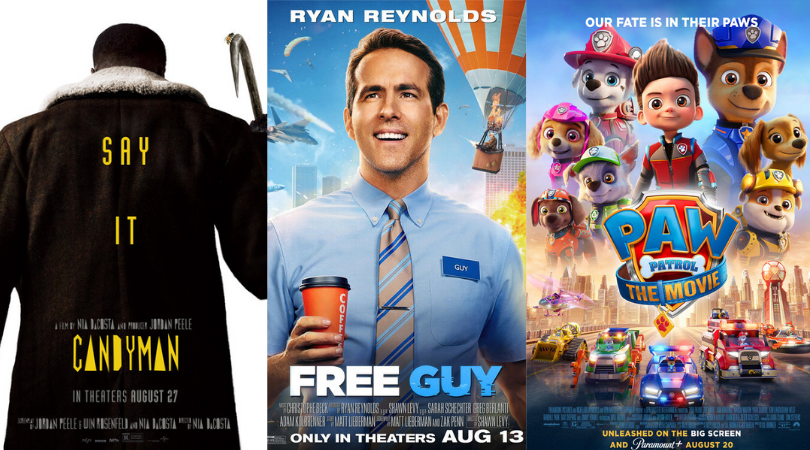 CANDYMAN opened at #1 with a strong $22.3M (Million) domestically, and $27.6M worldwide in its debut. This is well above expectations, and a significant win for Universal. Produced for just $25M plus marketing, this film will no doubt become profitable, and proves the strength of Jordan Peele as a brand name in the horror genre.

FREE GUY held at #2 with another $13.5M domestic (off just -26.7% from last weekend) to bring the U.S. total to $79.3M and the global total to almost $180M after a start of over $23M in China, the first live-action studio film to release in the market since the country's blackout period has ended. Fueled by critical praise and strong audience scores, the film is expected to continue to soar in China, the rest of international, and domestically, where it will pass the $100M mark by Labor Day. Produced for around $110M plus marketing, this is easily headed towards profitability for Disney and 20th Century Studios.

PAW PATROL: THE MOVIE is #3 with $6.6M, a domestic total of $24M, and nearly $62M worldwide. Produced for $26M plus marketing, this will be profitable for Paramount within the next two weeks, in another needed victory for the studio.

JUNGLE CRUISE is #4 with $5M, an impressive domestic theatrical total of $100M, $187M globally, and over $100M through Disney+ Premier Access, for a complete global haul of nearly $300M for Disney. Produced for $200M plus marketing, this has basically hit the break-even range, an okay result for this tentpole which was delayed by a full year.

DON'T BREATHE 2 is #5 with $2.8M, a domestic total of $24.5M, and $35.2M worldwide. Produced for $15M plus marketing, this film has hit the break-even range for Sony and Screen Gems already, and looks like it will ultimately bring in a modest profit.

RESPECT is #6 with $2.1M and a total of only $19.6M. Produced for $50M plus marketing, this will be a financial loss for all involved, and has already been placed on PVOD (Premium Video On Demand) by MGM.

THE SUICIDE SQUAD is #7 with $2M, a domestic total of just $52.7M, and $144.8M worldwide as its global theatrical run winds down. Produced for $200M plus marketing, this flop from WB and DC will ultimately cost the studio around -$150M in losses, continuing what has been a pricey losing streak for WB this year.

THE PROTEGE is #8 with $1.6M and a total of only $5.7M. This will be a moderate financial loss for Lionsgate, and is headed towards PVOD shortly, where the hope is that it will bring in more action fans, as PVOD has been a strong performer in the genre.

THE NIGHT HOUSE is #9 with $1.2M and a total of $5.1M, headed towards PVOD as well in the coming weeks, and also a moderate financial loss for Searchlight Pictures.

BLACK WIDOW is #10 with $855K (Thousand), a domestic theatrical total of $181.5M, a global theatrical total of $371M, and more than $125M through Disney+ Premier Access, bringing the complete financial haul to around a decent $500M for the studio. This excludes China, a significant Marvel hub where the film is no longer expected to play. Produced for $200M plus marketing, this one is a moderately profitable for Disney, in what is a modest win given the long delay in its release and pandemic challenges.

Next weekend all eyes are on Marvel and Disney's next MCU release, SHANG-CHI AND THE LEGEND OF THE TEN RINGS. This is the only new studio wide-release over the Labor Day holiday, and will be watched closely as exhibitors and the studio alike hope for new records to be set and for an impressive start both in the U.S. and abroad.