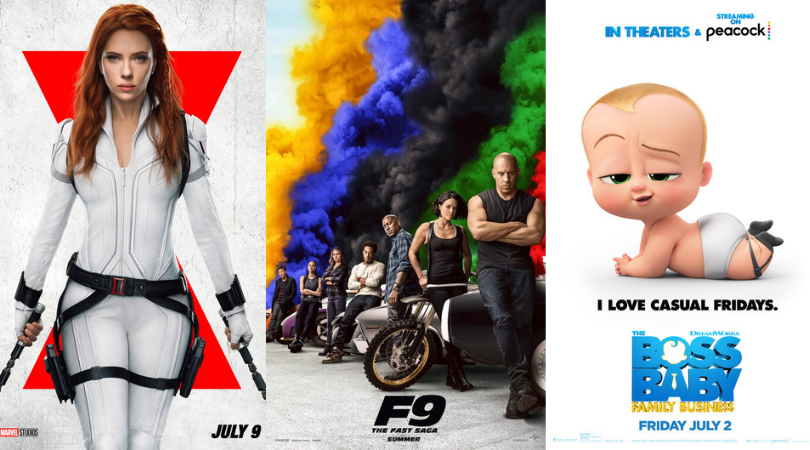 BLACK WIDOW made its debut at #1 with a massive $80M (Million) domestic, the biggest opening since December 2019. The film also brought in $78M internationally, and in a historic move, Disney has disclosed this weekend's Premier Access revenues as $60M in profit from the streaming service, to bring the complete global launch to an impressive $218M. China has yet to be scheduled however, which is an area of concern and could greatly impact final theatrical revenues for the superhero blockbuster. However, with a budget of $200M plus marketing, this should have no problem reaching profitability for Disney and Marvel.

F9: THE FAST SAGA held on at #2 with $10.8M, a domestic total of $141.3M, and a global haul which now stands at $541.8M and climbing. With a budget of $200M plus marketing, the Universal release will reach profitability within the coming weeks, though will ultimately fall short of previous franchise highs. Two more sequels in the wildly successful series are in production now, concluding the main saga at eleven films.

THE BOSS BABY: FAMILY BUSINESS is #3 with $8.7M, and a domestic total of $34.7M. Budgeted around $80M plus marketing, the Universal sequel is counting on international for profitability, where the first film was a global smash. Almost every market overseas has yet to debut, but expectations are that the film will perform solidly among families.

THE FOREVER PURGE slid to #4 with $6.7M, a decent domestic total of $27.4M, and an early $34.8M worldwide. Produced for just $18M, this Universal film will easily become profitable, continuing the winning streak of the successful horror franchise.

A QUIET PLACE PART II is #5 with $3M, bringing the domestic total to a hugely impressive $150M and the global haul to $279M. The film will cross the $300M mark worldwide soon, in a major victory for Paramount. Produced for $60M plus marketing, this sequel has become nicely profitable for the studio, with a third film on the way.

CRUELLA is #6 with $2.2M, a domestic total of $80.7M, and a worldwide total of $216M. Produced for around $100M plus marketing, the film is quickly approaching break-even range theatrically, though Disney has not disclosed its Premier Access numbers like they have for BLACK WIDOW. A sequel has already been announced as in development.

THE HITMAN'S WIFE'S BODYGUARD is #7 with $1.6M, a domestic total of $35M, and an early worldwide total of $56.8M. Produced for $50-75M plus marketing, this film will need stronger numbers overseas to reach break-even range, let alone profitability, as it is running sharply behind the original.

PETER RABBIT 2: THE RUNAWAY held at #8 with $1.2M, a domestic total of $37.7M, and a worldwide total of $139.4M. While down a significant amount from the first film, this Sony release cost only $45M plus marketing, and has reached profitability thanks to international, which has so far yielded 73% of the film's total revenues.

IN THE HEIGHTS is #9 with $630K, a domestic total of only $28.3M, and $39M worldwide. This film will be a sharp financial loss for WB, and was unable to connect with most audiences despite the critical acclaim and high exit scores.