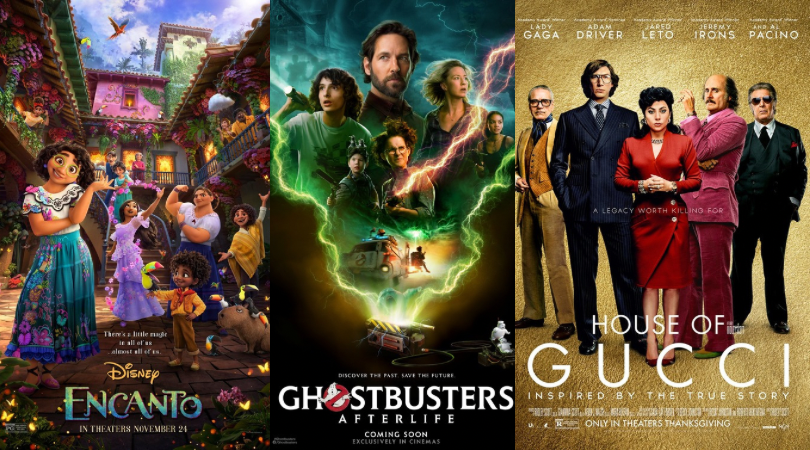 ENCANTO ruled at #1 over a sleepy post-holiday frame fueled by Thanksgiving leftovers, bringing in another $12.7M (Million) for a domestic total of $57.9M, and $116M worldwide. While these are fairly unimpressive numbers, the play for this film has always been to bolster the studio's Disney+ service, with only a 30-day theatrical window before Disney's newest musical comes to its streaming platform, right in time for Christmas. As such, the metrics for success are not being measured solely in theatrical revenue, but also in its membership engagement later this month.

GHOSTBUSTERS: AFTERLIFE held at #2 with $10.3M, to bring the domestic total to $102M and global to $145M and climbing. Produced for $75M plus marketing, this film is well on its way towards profitability for Sony, with a sequel all but guaranteed.

HOUSE OF GUCCI is #3 with $6.7M, a domestic total of $33.6M, and a fairly early $67M worldwide. Produced for around $75M plus marketing, this film is holding decently in the U.S. but will rely on international for any hope of reaching break-even range, let alone being profitable. Awards nominations, however, could give this release a notable boost.

CHRISTMAS WITH THE CHOSEN opened at #4 with $4.1M, but had a total debut of $8.7M to represent a major win for Fathom Events as the distributor.

ETERNALS is #5 with $3.9M, a domestic total of only $156M, and $384M worldwide, to become one of the only Marvel Studios titles to lose money and the only one to be given a "Rotten" rating, in what has been a rare black eye for the otherwise critically and commercially lauded MCU brand.

RESIDENT EVIL: WELCOME TO RACCOON CITY is #6 with $2.6M, a domestic total of just $13.1M, and $24M worldwide. Produced for $25M plus marketing, this will be a moderate financial loss for Screen Gems but should make up some ground on PVOD.

DUNE is #7 with $1.8M, a solid domestic total of $104.5M, and $382M worldwide, enough to represent WB's biggest earner of the pandemic era in the United States, and combined with HBO Max viewership, to see the sequel given the greenlight, completing the second half of the novel's adaptation.

CLIFFORD THE BIG RED DOG is #8 with $1.8M, a domestic total of $45.7M, and an incredibly early $51M worldwide. This was also the most-watched film ever on Paramount+, and the studio has already put a sequel into development.

SWORD ART ONLINE opened at #10 with $1M for FUNimation Entertainment.

Next weekend will get a slight jolt when Steven Spielberg's much-anticipated adaptation of WEST SIDE STORY makes its debut, while all eyes are on the following weekend, which will see the global launch of SPIDER-MAN: NO WAY HOME, on track to become one of the biggest December titles of all-time for Sony and Marvel Studios.