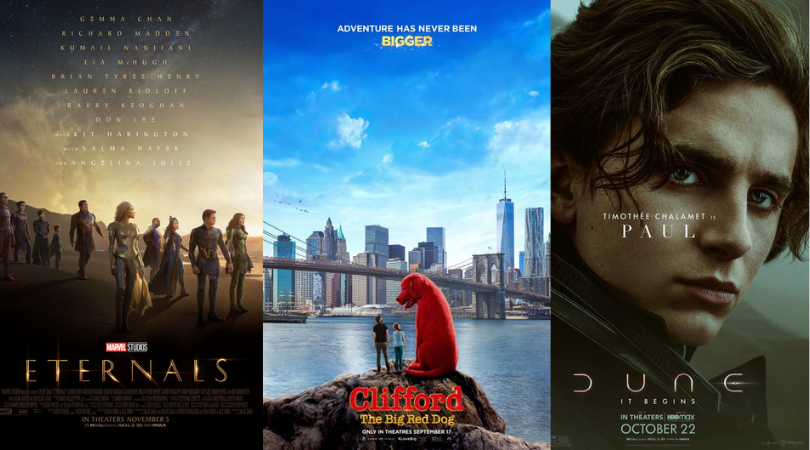 November 15, 2021
ETERNALS ruled at #1 again with another $27.5M (Million) domestically, off a decent -61% from its opening weekend. The U.S. total now stands at $118.7M and $281.3M worldwide with much more to be earned. Produced for $200M plus marketing, however, this MCU title is now destined to be among the lowest in the brand's history, and unlikely to reach profitability. At best, Disney and Marvel might be hoping for breakeven range, continuing the MCU and Disney's struggles in the pandemic era.

CLIFFORD THE BIG RED DOG is #2 with $16.4M for the weekend, and a 5-day debut of $22M domestically, with global rollout yet to begin. This is a solid result for Paramount, but at a budget of $64M plus marketing, this family film will rely on strong holiday holds and a decent international run of it's to reach profitability for the studio.

DUNE is #3 with $5.5M, a domestic total of $93.1M, and $351.2M worldwide. Produced for $160M plus marketing, this Legendary and WB release has also seen strong results on HBO Max, while it works its way towards breakeven range theatrically. The result has been enough of a success to warrant the sequel, an adaptation of the second half of the acclaimed novel.

NO TIME TO DIE held at #4 with $4.6M, a domestic total now of $150.4M, and $708.6M worldwide. Carrying a budget of $250M plus marketing, this Bond title will become the top film of the year before its run is over, but will not be profitable theatrically. It will essentially finish at breakeven, but see profit through ancillary revenue sources, making this an overall win for EON and MGM given the long delays and an international market still recovering.

VENOM: LET THERE BE CARNAGE is #5 with $4M, a domestic total of $202.7M, and $441.5M worldwide. This Sony hit is now only the second film to crack the $200M threshold in the United States after fellow Marvel hero SHANG-CHI. Produced for $110M plus marketing, this has already earned a nice profit for the studio, with more to come.

BELFAST opened at #8 with $1.8M for Focus Features.

SPENCER is #9 with $1.5M, and a total of $4.6M for Neon, continuing to hammer home the dismal state of the specialty market as older audiences have not significantly returned to their prior moviegoing habits.

Next weekend all eyes are on Sony's GHOSTBUSTERS: AFTERLIFE, as the return of the franchise along with its legendary original cast passing the torch, hopes to connect with audiences across multiple generations. Also making its debut is WB'S KING RICHARD, which will simultaneously be available on HBO Max, and beginning what is expected to be a long awards run for star Will Smith.
The Roadmap Promise