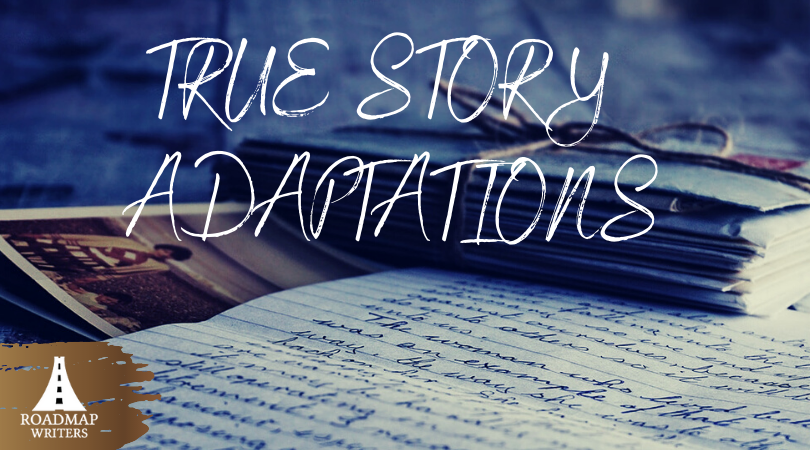 The Truth About True Story Adaptations
By Terra Joy

True story adaptations tend to be some of the most deceptively difficult scripts to write well, and to sell if they are a period piece, yet they are considered reliably bankable for attracting wide audiences and critical acclaim. Now more than ever, grounded and authentic stories are the name of the game in the marketplace. So what better source to pull from than people who have really lived, events that have really happened, and journeys of transformation and justice that have already occurred.

Roadmap recently hosted a panel on Clubhouse with produced writers and development execs to talk about lessons learned around true story adaptations, both features and series. So whether your true story script is based on something or someone personal to you, in the zeitgeist, or an undiscovered gem from history, here are some of the insights we gathered:

Decide on the “owner” of the story. What this means is, when it comes to writing a screenplay based on or inspired by a true story, you as the writer must decide where your loyalty lies within that story. What aspect is the most sacred that everything else stems from? Whether it be the protagonist, a key event, the nature of the struggle, or the lesson learned, in thinking about what first hooked you and what has kept you coming back to chew on it, the answer will start to become clear. That is your entry point, and the entry for your audience as well.

And speaking of loyalty, prioritize the emotional facts over the technical facts. Just because a certain element really did happen, doesn’t mean it’s a good enough reason to put it in the script. This isn’t to say that it’s okay to have your protagonist or antagonist do something that directly contradicts what evidence suggests, but the story you build has to be in service to the emotional truth of events, first and foremost. Otherwise, there will not be a clear POV or theme that translates, and you risk the script reading like a string of events rather than a cohesive narrative that builds.

This also means that true story adaptation writers need to find a way to make the intellectually interesting emotionally and visually compelling. That advice can apply to any screenwriter, really, but it is especially important and easily overlooked with this subgenre. So get clear on what exactly drew YOU to the story and why YOU are the person to write it. One could argue that some things are just objectively mind boggling, emotional, trying, inspirational, intellectually interesting, etc. But that sense of “inherent” draw will only get you so far, and it won’t be enough to hook someone page after page or in front of the screen. But what elevates a true story retelling past that heady sense of intrigue, is the punch that it packs on an emotional level. What is it specifically that resonates with you and why? Peel back those onion layers, because part of what makes a story so effective is what you need to work out and face as you write it. AKA, your vulnerability is your superpower (Don’t believe me? Watch Brene Brown’s Netflix special). Your catharsis allows you to write a story that’s a love letter to humanity in some way. So how do you see yourself, your experience, your goals or fears in this? What’s so special about it to you? Once you can answer that in a clear and succinct way, use that as your north star when you outline, revise, and pitch. Let it point you to the theme by which to filter through each scene you write.

It’s okay to revisit stories that have already been done, as long as you can establish your fresh take on it. Rights aside, figures, events, folklore and mythology that we’ve already seen on screen are not definitively untouchable, so you should feel free to “upcycle” them! Just know that the timing in the market has to be right and your POV has to make it feel original. This is why tone, voice, theme and POV are so important. For example, there have been so many WII dramas, but a film like Taika Waititi’s JOJO RABBIT (based on a book) made it feel totally original. The bare bones of that story could easily sound like a traditional drama, since (spoilers!) a young Hitler-loving boy falls in love with a young Jewish stowaway in WWII Berlin. He has to revaluate his beliefs, his mother betrays the beliefs he thought they shared, and she gets killed trying to protect a Jewish life. Not only that, but Jojo’s father is missing and his sister is dead, and the last adult figure looking out for him also dies. But there was so much quirk, color, humor, and childish enthusiasm on top of all of that, and it worked. Because that’s what the story was really about: childhood and the moments that transform us out of it.

Find ways to be production-conscious if your true story is at all a period piece, while still telling the story you want to tell. One of the reasons why period piece stories are generally a tough sell, is because of the automatic budget ramifications. And in this era of covid production, safety parameters require even more of the budget. So any budget-conscious decisions you can make really do add up to make your period piece script more appealing over others. For example, keep the number of active characters on the smaller side, envision smaller intimate interiors vs sweeping exterior shots, and choose rooms where the decor and appliances can be easily/cheaply changed. As homeowners would attest, having to gut the kitchen to make it look like the 1950s is so much harder than turning the living room into a 1950s throwback. And know that sometimes all it takes is the success of a similar project to pave the way. So don’t let the fear of marketplace timing prevent you from writing the period true story that you want to write. Because by the time there is another wave to ride, you will be polished and ready, as opposed to trying to play catch up.

Another element that supports both the production value and the emotional, narrative spine of your script, is to zero in on a particular time period, rather than trying to tell a full life story or show the complete unfolding of events. Think about your thematic north star and the element that hooks you the most, and then create a clear timeline around the most key turning point or two that showcases that for maximum impact.

Period piece true stories also need to be pitched a little differently. You should have a clear answer to why it still speaks to modern day audiences and how the period element enhances the story. Does it address a question or reflect a struggle we are still facing? Does it provide a particular brand of escapism? Another great piece of advice for pitching is, don’t separate out what really happened vs. what you made up. This would make your pitch harder to follow and split your listener’s attention. Keep them in the flow of the character development and major plot points you’re weaving as if it’s all one cohesive and contained story. Because that’s what it is to everyone who isn’t you. And then if people ask about which craziness was true, you can confidently clarify, which will only elevate the staying power of your story.

Lastly, know your rights, meaning the state of any life rights, preexisting IP, and whether or not the story is in the public domain. And when you’re pitching your true story adaptation, make sure your listener is clear on your level of ownership or the working relationship that you have with the rights holder. So don’t be afraid to reach out to those who you want to feature in order to build a rapport! Put on your detective hat and find out which parties currently hold the rights and when they expire. You’d probably also be amazed at just how much is in the public domain.

There are so many leaders, survivors and heroes who have been overlooked by education systems and mainstream media, many because of the colors of their skin and the cultures they represent. But the marketplace is more ready than it’s ever been before to hear and cultivate these stories. So let this serve as a sort of checklist to empower you as your craft and refine your true story inspired projects!