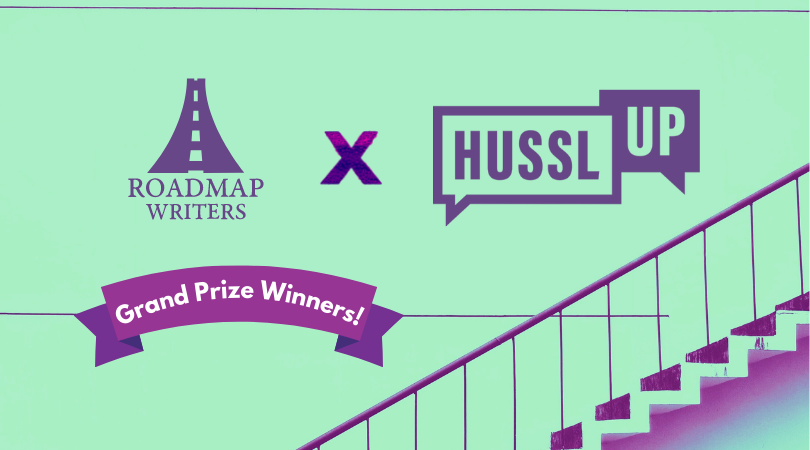 Check out this article in Variety to learn more about their script, SHRINK RETREAT. It blew our readers away, and Sarah and Josh's passion for the material shone through to wow our judges.

Sarah Mack and Josh Price are an actor/writer duo currently living in Atlanta with their handsome pup Steinway. Josh is an award-winning writer with multiple recommended scripts on The Black List, and Sarah’s comedic voice can be seen on many stand-up stages. As writers and creators, Sarah and Josh first teamed up on Sarah’s hit short series ‘IT’S FINE’, which can be streamed on Amazon. After collaborating on several other projects, including the award-winning short ‘THE ART OF HOSTING’ (2022 Toronto Comedy Film Festival Winner – Best Director, Sarah Mack), Sarah and Josh wrote their first feature-length comedy together: ‘SHRINK RETREAT’. Since winning the 2022 Husslup/Roadmap Writers Competition, Sarah and Josh have taken several meetings and subsequently started the exciting process of adapting ‘SHRINK RETREAT’ into a series!

We sat down with Sarah and Josh to discuss their experience in throughout Roadmap x Husslup and their secret to staying the course in a competition.

How did you hear about the Roadmap x Husslup Competition?

Josh: Roadmap has been on both of our radars as a trusted source for script review and competitions, and in terms of being a community that supports writers. So when I saw the contest partnership with Husslup, I submitted SHRINK RETREAT. I didn’t know how it was going to go, but I thought we’ll see.

Sarah: It was a nice example for me, because I tend to get really overwhelmed by all the writing competitions. So [this experience] makes me really grateful that Josh champions us and our writing. He just really doesn’t get discouraged.

What’s your secret to staying optimistic?

Sarah: He does remain optimistic, and I think it’s one of the few times when a white male can really put his money where his mouth is. He believes in himself, but his writing is so good that I’m like, ah - I wanted you to not be so good, but you are!

Josh: I think I can speak for us both and say that we love doing this. We’re still fairly new into this realm. I knew coming in that I’d love to do it but [I’d have] so much to learn. So I get excited about the opportunities to get stronger, and to get better.

What was your experience participating in the competition like?

Josh: I think because it was a new venture, the process was filled with a lot of “we’ll see.” We were just going with the flow. In terms of Roadmap and Husslup, it was such a supportive community. It was so clear that [the competition] was coming from a place of wanting to help other people shine. I can tell you that every part of the process felt genuine, legitimate, supportive.

Sarah: I agree. I also just felt like it was very well organized every step of the way. It felt like the people that were organizing it genuinely wanted good things to come from this. It was lovely to feel like [Roadmap and Husslup] want us to succeed and are putting us in a good position to do so.

Where can we keep up with you guys?

Congratulations again to our grand prize winners, Sarah Mack and Josh Price! Everyone at the Roadmap team is so excited to help them along as they adapt SHRINK RETREAT into a series.