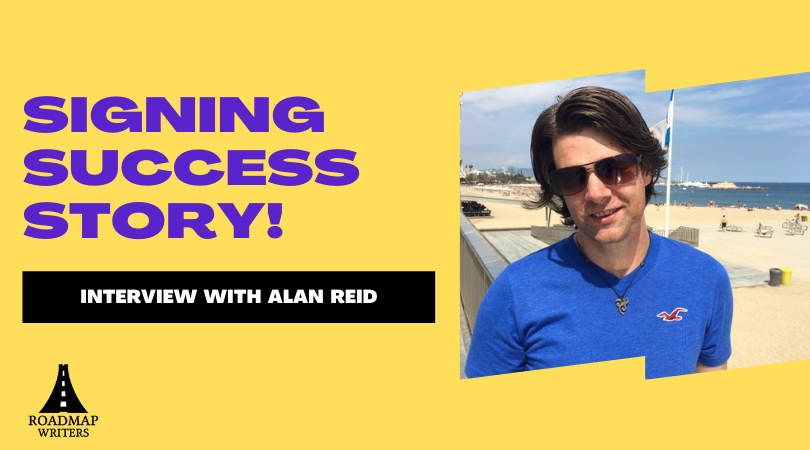 Congrats on getting signed! Tell us a little bit about your writing background?
Thank you. It's all still a bit surreal at the moment. Suddenly, I'm doing my first ever screenwriter interview. For years, I wrote songs, chased rock stardom, and found some success with music placements in film and TV. I figured I'd swap the melody and rhythm of music for tone and beats of screenplays. They're very similar in so many ways.

You signed with Affirmative Entertainment. Can you share with us what the process was like? How did you know it was the right fit?
I wrote a movie and targeted Nicholas Bogner at Affirmative as I felt my UK-based, Scottish voice needed someone British to contextualise what I was attempting to say on paper. During our initial consultation, Nicholas rejected me politely. But even though we were 5000 miles apart, we seemed to strike a chord with one another, and I told him a wee aside story. He said, “Write that”, so I did, he loved it, and the story of our relationship has hit the inciting incident beat.

How do you infuse your voice into your work?
I am a 53-year-old proud father of a son, about to graduate from University, and four-year-old twin daughters. There’s been many events and experiences in that time. I started screenwriting just over a year ago because I felt I had things to say, and interesting stories to tell in my own unique way.

Who are your writing influences?
Richard Curtis for every word he's ever put on a blank page. Tom Kapinos because of Californication and in-particular Hank Moody.  Phoebe Waller-Bridge, because of the way Fleabag crosses boundaries. Sally Rooney, Alice Birch and Mark O'Rowe because of how Normal People demonstrates character tension and subtext without the need for guns or exploding bombs. The Beatles and David Bowie because of their ability to be timeless.

Other than getting signed, what's jazzing you right now?
Getting signed is so exciting, but it's just another stepping-stone to the goal of getting something produced. To take a single voice and turn it into a chorus with an orchestra is a beautiful thing. I can't wait to be involved with so many great people, trying to do great things in synchronicity.  Also, I feel I can now come out of my screenwriter closet. I haven't yet told my family or friends what I've been up to behind closed doors.

How did you discover Roadmap?
I needed something different when I sought professional coverage. It's easy to get faceless feedback, and in some cases, that adds value. However, Roadmap has the advantage of providing executives names and biographies so that writers can target opinion. After all, writing is subjective. We don't all like to watch the same things, and tastes can vary with age, sex, and culture.