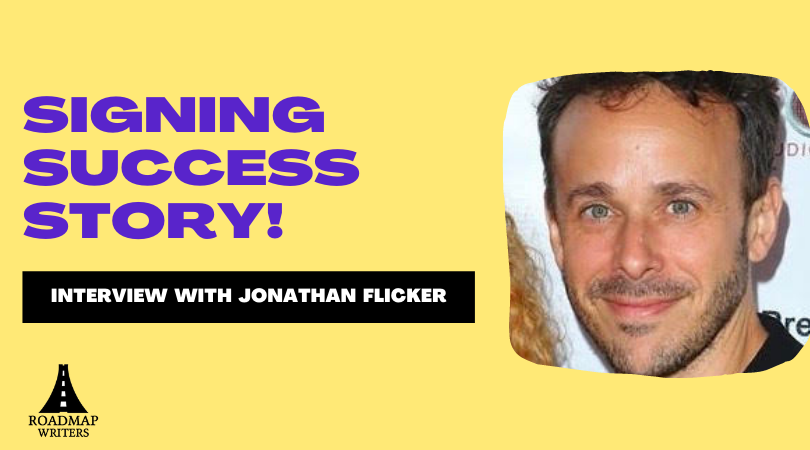 Congrats on getting signed! Tell us a little bit about your writing background?
Thanks so much! My original plan was to follow in my mother’s footsteps and work on Wall Street, but that went out the window after the first broker I worked for went to prison for insider trading. My uncle was a writer/director who created the show, BARNEY MILLER and wrote the classic James Coburn comedy, THE PRESIDENT’S ANALYST.  He convinced me to give writing a try so I wrote a feature inspired by my Wall Street experience and it placed as a top 30 of the Nicholl Fellowship. It was eventually optioned and then sold.

You signed with Zero Gravity. What was the process like? How did you know it was the right fit?
First and foremost, I want to say that Joey Tuccio is a gift to writers! Even after winning the teleplay award at Austin, selling a pilot, and a screenplay, I had trouble finding a rep. Roadmap was instrumental in helping me find my voice as a writer, so after a going through the Career Writer Program, I decided the time was right for a big push to get a manager and Joey was on board to help me make it happen.  Joey targeted certain managers with my new feature and I did the same with connections I had on my end. This resulted in several interested managers, but I ended up going with Joe Riley at Zero Gravity (thanks to an introduction by Joey) because he really got me and had a plan for each of my projects.

How do you infuse your voice into your work?
I never really knew what my voice was before Roadmap. I knew that I loved to write thrillers, but that was it. I never considered what that thread was that tied them all together. My degree is in psychology and I love to explore the consequences for our life’s decisions in the face of adversity, and the flexibility of our moral boundaries when all hope seems lost. It seems clear as day now, but that is only because of the work I did with Roadmap!

Who are your writing influences?
Here are some of the many… For TV, I would have to say, Vince Gilligan, Peter Gould, Graham Yost, and Jesse Armstrong. For features, it would be Taylor Sheridan, Robert Towne, Christopher Nolan, and Scott Frank.

As a storyteller, what matters most to you in your work?
Feeling emotion in the story. Hands down, that is most important thing, and it comes through character. If the reader isn’t feeling it, then I haven’t done my job as a writer.

Other than getting signed, what's jazzing you right now?
My two little boys keep me continually jazzed! On the writing side, I'm really excited about my new grounded sci-fi feature, THE MAN IN THE SHED, my latest one-hour financial crime drama, EXCESS, and the current project that I’m in the process of outlining.

How did you discover Roadmap?
I had been getting their emails for a couple of years, but I met Joey at AFF, and thought he was fantastic. I still waited another year before I finally signed up for Pitch Prep, but I’m so glad that I finally did!