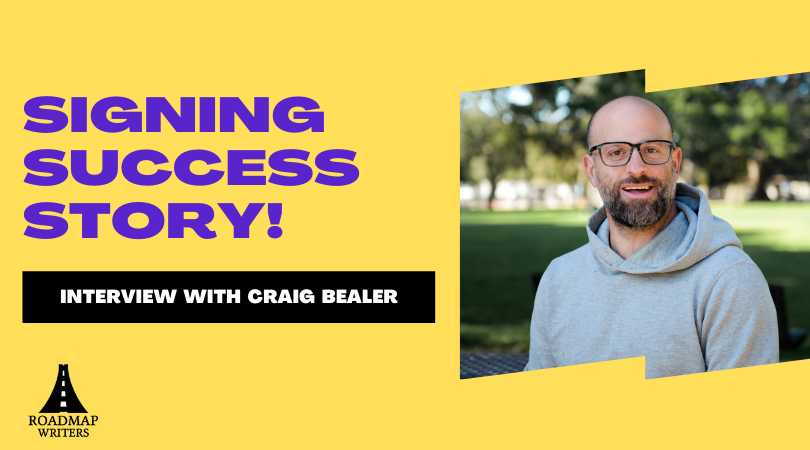 Tell us a little bit about your writing background? How did it all begin?
I’ve always loved to write. I was a journalism major and went on to law school and into a career as a lawyer, which entails a lot of writing and storytelling. Fast forward a few years… One day I was watching a movie and thought, “Hmm, I wonder what a script looks like?” I did some Googling around and read a few. And then it dawned on me, “Someone actually has to sit down and write these things — why not me!?”

You're signed with The Jackson Agency (yay!). How did that come about?
All because of Roadmap! I had been doing Top Tier and during the course of each month Joey sends out marketing emails of what various execs or reps are looking for. Through Joey, I responded to a rom-com request from The Jackson Agency and TJA ended up requesting my feature. A month or two later, TJA emailed me and we set up a Zoom where I got to meet Tiauna. At the time of that meeting, I was in the throes of writing a legal pilot, which she asked to read once I finished it. A few weeks later, I sent over the pilot and within a week I was signing the paperwork!

What are you most looking forward to about working with your rep?
So many things! Most of all, though, being part of a team and building new relationships. I love meeting new people and learning and growing from them. I’m also super excited to have an advocate for me and my writing and, in turn, to be an asset for my rep as well.

As a storyteller how do you infuse your voice into your work?
I think voice on the page comes from lots and lots of rewriting. Finding those moments in your script where you can take a little license. Have a little fun. Figure out an elevated way to replace something boring or average.

Who are your writing influences?
I love to read action scripts or any script that moves fast. A few of my favorites are Captain Phillips (Billy Ray), John Wick (Derek Kolstad), Whiplash (Damien Chazelle), Speed (Graham Yost), Ozark / The Accountant (Bill Dubuque), and lots of others.

Having reached this new milestone for your career, what is one piece of advice you know now, that you would tell yourself when you first started out?
I’m still not sure I follow this, but I try to be more calm about things — to not get too excited or too down on the turn of a “yes” or a “no.” Things will work themselves out and it’s better to judge myself on my effort rather than the result.

How did you first discover Roadmap?
There’s a quote that goes something like, “When the student is ready, the teacher will appear.” Prior to becoming a Roadmapper, I had been getting Roadmap emails for the better part of a year, but I hadn’t signed up. At that time, one of my scripts had received high marks on The Black List website, which landed me my first general meeting. The meeting went well enough and I was invited to pitch on an open assignment. I did so and didn’t get the assignment. More than that, though, I had absolutely no clue what I was doing. I had been heavily focused on the craft side of writing and not enough on the career side. Soon after that, I signed up for Roadmap and that’s when Dorian and Joey (and the rest of the crew) went to work on me!