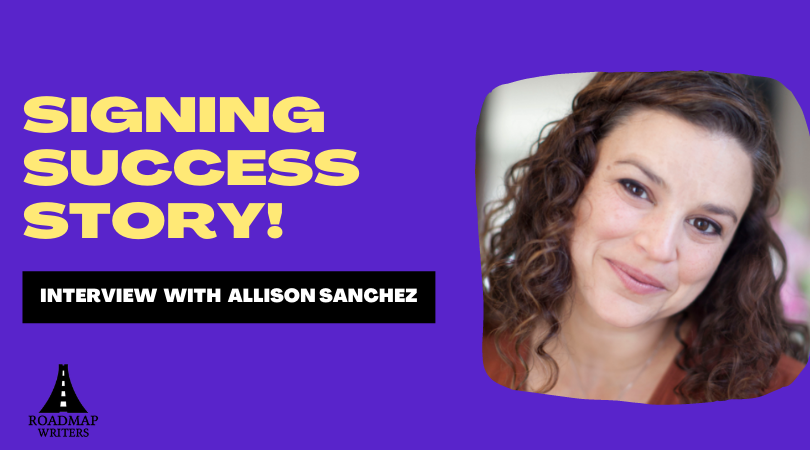 Tell us a little bit about your writing background. How did it all begin?
I was originally an actor, but I found that when I moved to LA, the roles for a Puerto Rican woman were still primarily stereotypes — they just didn’t capture my experience at all. I was auditioning for “Gang Leader’s Girlfriend” like...a lot. There are just so many more stories in the Latinx experience — and so many more ways and genres in which to tell them!

I stopped acting and began writing — first in journalism, where I wrote about life, food, art, and travel. I really enjoyed it and I got to visit some amazing places and stay in hotels that I will never again be able to afford (until I’m like, “has several shows on the air” kind of rich), but I always dreamed of writing for TV. So when an assistant research position came up on the CW’s Nancy Drew, I leapt at the chance. The first day in the room, I knew I was in my dream career. Everything just clicked.

You just signed with Artists First. How did that come about?
I’ve been working as an assistant on TV for about 2 years (currently a script coordinator on an FX show) and was really hoping to make the leap toward having representation. Joey Tuccio (at Roadmap) and a writer, Aadip Desai, had set up a diversity initiative and I decided to apply! Luckily, Joey loved my work and decided to help me find a rep. He was amazing — would not quit until there was interest.

At the same time, Coverfly decided to feature me as a writer to watch — after my YA zombie pilot was a finalist in the Atlanta Film Festival. I ended up having two weeks of meetings with several representatives! It was a whirlwind and helped me narrow down what I was looking for. I really, really loved a few of the managers and so it was an incredibly tough decision, but ultimately — I adored Casey and Corrine at Artists First and felt like they were the best fit as both managers and a company.

What are you most looking forward to about working with your rep?
I’m just so excited about this next phase of my career. It’s continual hard work, but now I have more members of my team — supporting me both creatively and professionally — and that’s such an incredible feeling. A writer friend recently described becoming a writer not as “one big break” but as a series of several miracles. I loved that and this feels like one of those miracles on a (hopefully) long journey.

As a storyteller how do you infuse your voice into your work?
Mostly, I just refuse to stop infusing murder into each and every moment. When I was a food and travel journalist, a real conversation I had with my editor involved him, with gentle exasperation, asking why, in a review about chips, I did not mention how the chips tasted but instead compared them, again and again, to horrible deaths. But folks, I can’t stop won’t stop. I’ve put in my ten thousand Malcolm Gladwell murder hours and I’m NOT going to waste them.

Murder aside though, it’s really important to me to tell stories about BIPOC, especially women, that are truly diverse. Latinx women are not a monolith. There’s room for all sorts of different stories and experiences. Personally, I want to tell stories about WOC who are dorky and funny (like me), who have sci-fi adventures and encounter ghosts and time travel (not like me — unless I’M the ghost? Oh no! Am I the ghost?!). So really, I think I infuse my voice by just allowing me to be me. And also, by describing grisly crimes.

Who are your writing influences?
I grew up with JJ Abrams stuff — Felicity, Alias, Lost, Fringe — I was obsessed with all of it! His projects continually ground strong characters you fall in love with in fantastical situations and worlds and I’d die to have a show like Lost on television that sparked so many imaginations and theories (If I’m not already dead and a ghost, which WE’RE NOT SURE ABOUT ANYMORE). I also love horror writers who are able to use horror as a metaphor in a beautifully seamless way — Jordan Peele’s works or Jennifer Kent’s Babadook come to mind. And I’m super lucky to have worked on projects by people who I admire and have been amazing mentors. Both shows I’ve worked on have had the most incredible female showrunners/creators. They’ve been so generous with their time and talent and have been huge influences on my writing (and in modeling how to be in a room and as a writer/human)!

Having reached this new milestone for your career, what is one piece of advice you know now, that you would tell yourself when you first started out?
I’m a mom of a 4 year old and 5 month old. A year ago, I was sobbing on the phone with another mom writer (who was much more successful than I was) terrified that having a baby would keep me from ever being a real writer on TV. Today, I have a manager and just finished my first freelance episode of television as a writer! So, I’d tell pregnant pandemic me — who was eating a pepperoni pizza by herself and crying — that it will be okay. That it’s okay to take a maternity leave as an assistant. That it won’t be easy, but that she can be a mom and also be passionate about writing and her career. And that other people will notice that passion and talent and it will pay off. I mean — it’s a journey. And I still cry a LOT. But I also believe things in Hollywood are changing and I can make this leap to staff writer (and eventually creator and showrunner) while also passionately loving my family. I AM GOING TO HAVE IT ALL LIKE LIZ LEMON.

How did you first discover Roadmap?
I discovered Roadmap through a diversity initiative I saw on Twitter. You never know how these things will turn out. Often, you might have a lovely meeting with someone and then never hear from them again. Everyone’s busy! But I can’t thank Roadmap and Joey enough for everything they’ve done for me — they were busy but made finding me a manager a part of their busy. And I am forever in Joey’s debt — he just went above and beyond! And this step makes me feel like I have a concrete way forward in an industry that is really hard when you don’t have family connections, when you’re a working mom, when you’re a woman of color in a genre that is dominated by men. If I’m on the road up the mountain, this was someone giving me a whole boost up onto a ledge so I don’t have to walk as far. And now, with that momentum, I’ve got to get these bleeding feet back in my hiking boots and keep climbing.

Thank you so much Joey, Aadip, and Roadmap! You’re the best!